Maynardville (originally named Liberty) is a city in and the county seat of Union County, Tennessee, United States. The city was named to honor Horace Maynard, who successfully defended the creation of Union County from a challenge from Knox County. Its population was 2,413 at the 2010 census, up from 1,782 at the 2000 census. It is included in the Knoxville metropolitan statistical area.

What is now Maynardville began in the early 19th century as a small community known as Liberty. When Union County was created in the 1850s, Liberty, being nearest the center of the county, was chosen as the county seat. The land for the courthouse square was donated by Marcus Monroe (1793–1870), a local minister.

Musicians playing in Maynardville in 1935

Shortly after the Tennessee General Assembly passed legislation authorizing the creation of Union County, Knox County secured an injunction blocking the creation of the new county, which would take some of its area from Knox County. To defend the new county, its supporters retained the services of Horace Maynard (1814–1882), a Knoxville-area attorney and later U.S. Postmaster General. After Maynard successfully defended the new county in litigation proceedings, Liberty was renamed "Maynardville" in his honor. Union County was formally recognized in 1856.

Country music singer Roy Acuff was born in Maynardville in 1903. The Acuff family had been well-established in Union County since the mid-19th century. When Goodspeed published its History of Tennessee in 1887, the Union County section included a brief biography of Roy's grandfather, Coram Acuff (1846–1931), who represented Union County in the state legislature. Other notable country musicians born in the Maynardville vicinity include Carl Smith, Chet Atkins, and Kenny Chesney, the latter two having been born in nearby Luttrell.

Maynardville is situated near the center of Raccoon Valley, a narrow valley stretching for roughly 15 miles (24 km) between Copper Ridge on the south and Hinds Ridge on the north. Like most mountains in the Ridge-and-Valley Appalachians, these two ridges are long and narrow, and often fractured into smaller hills and knobs. The Norris Lake impoundment of the Clinch River is located approximately 5 miles (8.0 km) north of Maynardville.

According to the United States Census Bureau, the city has a total area of 5.4 square miles (14 km2), all land. 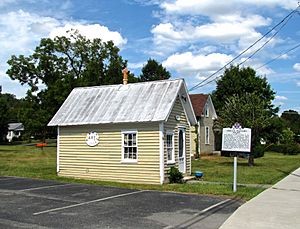 In the 2009 film Inglourious Basterds, the character of 1 SSF First Lieutenant Aldo Raine, portrayed by Brad Pitt, is said to be a moonshiner from Maynardville.

In Iron Man 3, Tony's suit crash lands near Rose Hill, four miles from downtown Maynardville. He enlists the aid of a young boy and works on fixing the suit while fighting off several agents before heading to Chattanooga.

According to 2010 Census report published by the East Tennessee Development District in 2012, the top three industries employing residents of Maynarville were professional services, trade, and manufacturing.

Nearly 62% of the city's population was reported to commute outside of Union County for employment in 2010.

All content from Kiddle encyclopedia articles (including the article images and facts) can be freely used under Attribution-ShareAlike license, unless stated otherwise. Cite this article:
Maynardville, Tennessee Facts for Kids. Kiddle Encyclopedia.