Kids Encyclopedia Facts
Not to be confused with Kingsport, Tennessee.

Kingston is a city in and the county seat of Roane County, Tennessee, United States. This city is thirty-six miles southwest of Knoxville. It had a population of 5,934 at the 2010 United States census, and is included in the Harriman Micropolitan Statistical Area. Kingston is adjacent to Watts Bar Lake.

Kingston has its roots in Fort Southwest Point, which was built just south of present-day Kingston in 1792. At the time, Southwest Point was on the fringe of the legal settlement area for Euro-Americans. A Cherokee village, headed by Chief Tollunteeskee, was situated just across the river, at what is now Rockwood. In 1805, Colonel Return J. Meigs, who operated out of Southwest Point, was appointed Cherokee Agent, effectively moving the agency from the Tellico Blockhouse to Southwest Point. The city of Kingston was established on October 23, 1799, as part of an effort to partition Knox County (the initial effort to form a separate county failed, but succeeded two years later). Kingston was named after Major Robert King, an officer at Fort Southwest Point in the 1790s.

Building in Kingston used briefly as Tennessee's state capitol in 1807, photographed in 1889

On September 21, 1807, Kingston was Tennessee's state capital for one day. The Tennessee General Assembly convened in Kingston that day due to an agreement with the Cherokee, who had been told that if the Cherokee Nation ceded the land that is now Roane County, Kingston would become the capital of Tennessee. After adjourning that day, the Assembly resumed meeting in Knoxville.

At the outset of the Civil War in 1861, Kingston was selected as the site of the third session of the East Tennessee Convention, which attempted to form a new, Union-aligned state in East Tennessee. Due to the Confederate occupation of the region, however, this third session, which was scheduled for August 1861, never took place. In October 1861, William B. Carter and several co-conspirators planned the East Tennessee bridge burnings from a command post in Kingston. On November 24, 1863, Confederate Cavalry under Joseph Wheeler numbering about 500–1,000 men tried to take Kingston from the Union, but they were unsuccessful.

In 1955, the Tennessee Valley Authority completed work on the Kingston Fossil Plant, which at the time was the world's largest coal-burning power plant. The plant, which consumes roughly 14,000 short tons (13,000 t) of coal daily, can produce up to 1,456 megawatts of electricity. The plant's 1,000-foot (305 m) smokestacks are a familiar sight to those driving on the Roane County stretch of Interstate 40. On December 22, 2008, a 40-acre (0.16 km2) impoundment containing fly ash slurry from the power plant broke, spilling more than 1 billion US gallons (3,800,000 m3) of waste into the surrounding area. 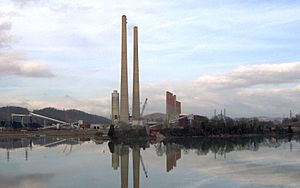 The town is situated at the confluence of the Clinch, Emory, and Tennessee rivers. These confluences are now part of Watts Bar Lake, a reservoir created by the impoundment of the Tennessee by Watts Bar Dam several miles to the southwest. 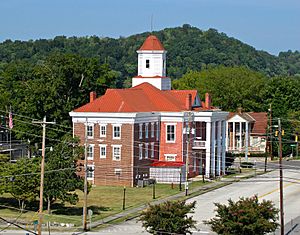 The Old Courthouse in Kingston, built in the 1850s

All content from Kiddle encyclopedia articles (including the article images and facts) can be freely used under Attribution-ShareAlike license, unless stated otherwise. Cite this article:
Kingston, Tennessee Facts for Kids. Kiddle Encyclopedia.