Scott County is a county located in the U.S. state of Tennessee. As of the 2010 census, the population was 22,228. Its county seat is Huntsville. Scott County is known for having seceded from Tennessee in protest of the state's decision to join the Confederacy during the Civil War, and subsequently forming The Free and Independent State of Scott.

Scott County was formed in 1849 from portions of Anderson, Campbell, Fentress and Morgan counties. It is named for U.S. Army General Winfield Scott, a hero of the Mexican War.

During the Civil War, the county was strongly Unionist, voting against secession from the Union in Tennessee's June 1861 referendum by a higher percentage (521 to 19, or 96%) than in any other Tennessee county. This sentiment was encouraged by a June 4, 1861, speech in Huntsville by senator from Tennessee, Andrew Johnson. In 1861, the county assembly officially enacted a resolution seceding from the state of Tennessee, and thus the Confederacy, forming the "Free and Independent State of Scott," also known simply as the "State of Scott." The county remained a pro-Union enclave throughout the war.

The proclamation was finally repealed, over a hundred years later, by Scott County in 1986.

Big South Fork of the Cumberland 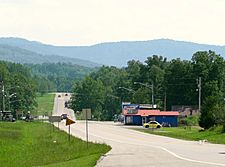 US-27 at the Tennessee-Kentucky state line, looking south into Scott County

Scott County, a part of the Cumberland Plateau, includes the majority of the Big South Fork National River and Recreation Area.

As of 2010, the largest self-reported ancestry groups in the county were:

All content from Kiddle encyclopedia articles (including the article images and facts) can be freely used under Attribution-ShareAlike license, unless stated otherwise. Cite this article:
Scott County, Tennessee Facts for Kids. Kiddle Encyclopedia.