Morgan County is a county located in the U.S. state of Tennessee. As of the 2010 census, the population was 21,987. Its county seat is Wartburg.

Morgan County was formed in 1817 from portions of Anderson and Roane counties. It was named in honor of Daniel Morgan (1736–1802), an American Revolutionary War officer who commanded the troops that defeated the British at the Battle of Cowpens, and who later served as a U.S. congressman from Virginia. The county had been part of lands relinquished by the Cherokee with the signing of the Third Treaty of Tellico in 1805. The original county seat was Montgomery until 1870, when it was moved to Wartburg.

On November 10, 2002, a tornado destroyed 50 homes. At least seven people were killed in the Morgan County communities of Mossy Grove and Joyner.

According to the U.S. Census Bureau, the county has a total area of 522 square miles (1,350 km2), of which 522 square miles (1,350 km2) is land and 0.3 square miles (0.78 km2) (0.06%) is water. The county, which lies on the eastern edge of the Cumberland Plateau, is known for its rugged mountain terrain, and cold mountain streams and rivers. The Crab Orchard Mountains comprise a large area of the county, which includes several designated wilderness areas, Frozen Head State Park, and Lone Mountain State Forest. 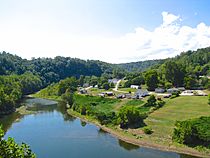 The Emory River rises on the slopes of Bird Mountain near Wartburg. The Obed River, a designated national wild and scenic river, empties into the Emory southwest of Wartburg. The Clear Fork, which forms part of Morgan's boundary with Fentress County, joins the New River in Scott County to the north to form the Big South Fork of the Cumberland River. 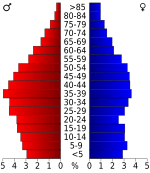 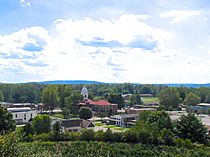 All content from Kiddle encyclopedia articles (including the article images and facts) can be freely used under Attribution-ShareAlike license, unless stated otherwise. Cite this article:
Morgan County, Tennessee Facts for Kids. Kiddle Encyclopedia.