Oliver Springs is a town in Anderson, Morgan, and Roane counties in the U.S. state of Tennessee. Its population was 3,231 at the 2010 census. It is included in the Harriman, Tennessee Micropolitan Statistical Area, which consists of Roane County.

Oliver Springs was founded in 1821 as Winter's Gap. It was named for its first permanent settler of European descent, Major Moses Winters, who had settled in the area before 1799.

Before that time, the area around Oliver Springs had been used by Native Americans as a hunting ground and campsite. Natural mineral springs and abundant wildlife on Windrock Mountain encouraged Native Americans to stay. The springs, whose reputation for miraculous medicinal properties lasted until the 20th century, were called Tah-hah-lehaha, which meant "healing waters" in the Cherokee language.

The land remained unexplored by European settlers until 1761. At this time, a long hunting expedition led by Elisha Walden explored much of the Clinch and Powell River valleys. However, settlement in the area did not begin in earnest until the 1790s, and growth remained slow.

In 1826, Richard Oliver became the town's first postmaster. The town was renamed Oliver's Springs in his honor. The town's name was briefly changed to Poplar Springs, and then to Oliver Springs. Oliver provided mail service from his 35-room mansion, which also served as an inn. He was the first to develop the commercial potential of the mineral springs. He would transport his guests between the springs and the inn. During the Civil War, the inn was used as a hospital by both sides. 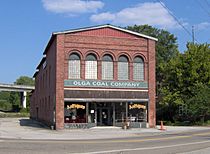 The Sienknecht Store building, built c. 1901. The store was used for a scene in the movie October Sky, and still retains the "Olga Coal Company" facade created for the film.

Joseph Richards bought Oliver's land in 1873. He built the first resort hotel, and in 1894 replaced this first structure with a 150-room hotel with then-modern amenities. Oliver Springs became a popular resort town. The Oliver Springs Hotel catered to wealthy guests, who came from all over the U.S. and Europe to drink the waters and bathe in the springs. In 1888, the railroad came to Oliver Springs and brought thousands of visitors to the springs. The hotel burned in 1905. The town decided to cover the springs rather than rebuild the hotel. Evidence of water conduits and reservoirs can still be seen on the site.

Oliver Springs had a base camp during the Coal Creek War in the 1890s.

In the early part of the twentieth century, the area became dependent on the coal industry. According to historian Keith Glass, the Windrock Coal and Coke Company, a subsidiary of the Bessemer Coal, Iron and Land Company of Birmingham, began operating a coal mine near Oliver Springs circa 1904.

In 1942, during World War II, the U.S. government bought up the neighboring communities of Robertsville, Edgemoor, East Fork, Elza, Bethel, Scarborough, and Wheat and built the secret city of Oak Ridge as part of the Manhattan Project. During this period, one of the most prominent buildings in Oliver Springs—the Dr. Fred Stone, Sr., Hospital—was built by Dr. Fred Stone, who worked as a physician and examiner for new Manhattan Project employees. Eventually, the economy of Oliver Springs became dependent on government employment in Oak Ridge, and suffered when employment levels declined at the end of the Cold War in the early 1990s.

In the years following the end of the Cold War, Oliver Springs and its neighbors have struggled to re-establish a solid foundation on which to base their economies. Oliver Springs has experimented with several industries. In the late 1990s, the movie October Sky was filmed in nearby coal mining areas as well as the city's downtown area. Currently, the local economy is beginning to take advantage of the mountains, which are very popular among all-terrain vehicle (ATV) riders.

According to the United States Census Bureau, the town has a total area of 5.6 square miles (14.4 km2), all land. The town lies at the northwestern boundary between the Ridge-and-Valley Appalachians and the Cumberland Plateau. Walden Ridge, which marks the boundary between these two physiographic provinces, is visible just beyond the immediate hill tops. The Crab Orchard Mountains, which comprise the southern extreme of the Cumberland Mountains, rise atop the Cumberland Plateau just west of Oliver Springs.

The city of Oliver Springs is served by the school systems of the three counties among which the city is divided.

The recently restored Oliver Springs Railroad Depot, built in 1896 by the Southern Railway, now houses the Oliver Springs Public Library. In addition to the traditional book holdings, the library is home to the city's historical archives, originally collected by Snyder E. Roberts.

All content from Kiddle encyclopedia articles (including the article images and facts) can be freely used under Attribution-ShareAlike license, unless stated otherwise. Cite this article:
Oliver Springs, Tennessee Facts for Kids. Kiddle Encyclopedia.