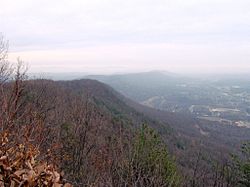 Walden Ridge (or Walden's Ridge) is a mountain ridge and escarpment located in Tennessee, in the United States. It marks the eastern edge of the Cumberland Plateau and is generally considered part of it. Walden Ridge is about 74 miles (119 km) long, running generally north-south. Its highest point is at Hinch Mountain (near Crossville), which reaches 3,048 feet (929 m) above sea level.

The section of Walden Ridge that is visible from the Chattanooga area is often colloquially referred to as "Signal Mountain" due to the presence of the small town of Signal Mountain, Tennessee nearby, the proliferation of broadcasting towers on its eastern edge, and the area's use by early nineteenth century Native Americans (and later Civil War soldiers) as a signal point toward Lookout Mountain south across the Tennessee River.

Being part of the Cumberland Plateau, Walden Ridge is also part of the Appalachian Plateau physiographic province.

All content from Kiddle encyclopedia articles (including the article images and facts) can be freely used under Attribution-ShareAlike license, unless stated otherwise. Cite this article:
Walden Ridge Facts for Kids. Kiddle Encyclopedia.