Jacksboro was founded in 1806 as a permanent county seat for the newly created Campbell County. The initial property for the town square was deeded by Hugh Montgomery, one of the earliest settlers in the area. The town was originally known as Walnut Grove, but was renamed "Jacksonboro" in honor of Andrew Jackson in 1819. The name was later shortened to "Jacksboro."

According to the United States Census Bureau, the town has a total area of 2.6 square miles (6.7 km2), all land. 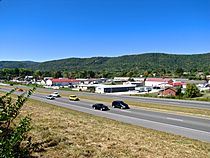 There were 767 households, out of which 27.2% had children under the age of 18 living with them, 58.5% were married couples living together, 10.2% had a female householder with no husband present, and 28.2% were non-families. 26.1% of all households were made up of individuals, and 11.7% had someone living alone who was 65 years of age or older. The average household size was 2.34 and the average family size was 2.80.

All content from Kiddle encyclopedia articles (including the article images and facts) can be freely used under Attribution-ShareAlike license, unless stated otherwise. Cite this article:
Jacksboro, Tennessee Facts for Kids. Kiddle Encyclopedia.