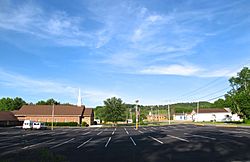 Arthur is an unincorporated community in Claiborne County, Tennessee. It is located along State Route 63 southwest of Harrogate, and a few miles south of the Cumberland Gap. Its zip code is 37707.

In 1870, land developer Alexander A. Arthur moved to the area from Montreal, Quebec, Canada. He laid out a town, based on consolidated land parcels. In 1876 the area was called Butcher Springs and with the creation of a post office the town became known as Arthur in 1890. Alexander Arthur was key in having a railroad from Knoxville to Middlesboro, Kentucky be installed through Arthur, allowing his namesake to develop into a railroad town. The town shipped coal, ore and other minerals.

All content from Kiddle encyclopedia articles (including the article images and facts) can be freely used under Attribution-ShareAlike license, unless stated otherwise. Cite this article:
Arthur, Tennessee Facts for Kids. Kiddle Encyclopedia.