Natural Tunnel State Park is a Virginia state park, centered on the Natural Tunnel, a massive naturally formed cave that is so large it is used as a railroad tunnel. It is located in the Appalachian Mountains near Duffield in Scott County, Virginia.

The Natural tunnel, which is up to 200 feet (61 m) wide and 80 feet (24 m) high, began to form more than a million years ago when groundwater bearing carbonic acid percolated through crevices and slowly dissolved limestone and dolomite bedrock. A small river, which is now called Stock Creek, was diverted underground and it continued to erode the tunnel over many millennia.

The walls of the tunnel show evidence of prehistoric life. Many fossils have been found in the creek bed and in the tunnel walls.

It is known that a Cherokee maiden and a Shawnee brave who had been forbidden to marry by their respective tribes, jumped to their deaths from the highest pinnacle above the Natural Tunnel. The place is now known as Lover's Leap.

Although Natural Tunnel State Park was created in 1967 and opened to the public in 1971, the natural tunnel has been a Virginian tourist attraction for more than a century; Daniel Boone is believed to have been the first European to see it in the 18th century. The 41st United States Secretary of State William Jennings Bryan dubbed it the "Eighth Wonder of the World".

A railroad was constructed through the natural tunnel in 1893. The first train, operated by the Virginia & Southwestern Railway Company, passed through the following year. In 1899, the Natural tunnel was purchased by the Tennessee & Carolina & Iron and Steel Company. The railway originally carried passenger trains; today, the line is still open but now run by Norfolk Southern and CSX and is only used to transport coal.

There is a 1,600-foot (500 m) boardwalk that allows disabled visitors to gain access to the natural tunnel.

Park visitors can also camp, swim, picnic and hike. There is a visitors center and naturally formed amphitheaters that are up to 600 feet (180 m) high. 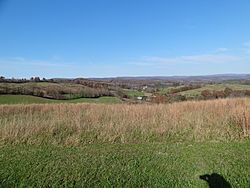 View from one of the trails

All content from Kiddle encyclopedia articles (including the article images and facts) can be freely used under Attribution-ShareAlike license, unless stated otherwise. Cite this article:
Natural Tunnel State Park Facts for Kids. Kiddle Encyclopedia.