The Vicksburg Campaign 1862-63 was the major action in the western theater of the American Civil War. Involving numerous battles, it climaxed on July 4, 1863, with the surrender of the Confederate stronghold of Vicksburg to Union General Ulysses S. Grant. The victory cut off the western parts of the Confederacy, and made the Mississippi River the basic transportation route for the further invasion of the Confederacy. The campaign has long been studied by military theorists as Grant outmaneuvered four enemy armies and rewrote the rule of warfare, especially regarding logistics and supply lines, while ensuring his choice as overall Union commander. 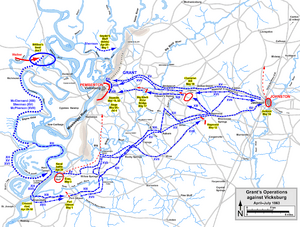 Map of the Vicksburg Campaign of the American Civil War

The western theater stretched not two hundred miles across Virginia, but a thousand miles from Cincinnati to New Orleans. The first western strategic goal of the Union was to seize full control of the Mississippi and Tennessee rivers, and state of Tennessee. The second goal was to use the Tennessee River to launch an attack at the rebel heartland in Georgia. The Mississippi River was of less strategic value, but control was a high priority because the "Father of Waters" was central to the image of nationhood held by westerners. Furthermore, control would completely knock Texas and Arkansas out of the war without the need to defeat the strong armies there. Throughout the war, Washington and Richmond both tended to ignore the west; they sent inadequate soldiers and supplies.

The two national governments, and their respective media and influential elites, were oriented toward the East front, which they mistakenly assumed would prove decisive. Responsibility for the various armies (and Union Navy) out west was divided on both sides. But while the Federals learned to cooperate under the brilliant consensus-oriented leadership of Grant, the Confederates squabbled continually, and failed to communicate and cooperate. Grant thus beat them piecemeal.

Grant's biggest challenge was geography and nature itself. The Union armies were challenged by swamps and mud, by the twists and turns of the rivers and bayous that hid a hundred bushwhackers, by the insufferable heat, and especially by diseases that northerners were unaccustomed to. Lee believed that the Yankees would be wiped out by malaria, so there was no need to ship a portion of his troops west. Indeed, every year doctors treated 900 cases of malaria per thousand of Grant's soldiers (victims usually were recorded multiple times, most men never caught the disease). The Yankees, however, had ample supplies of quinine, and kept the death rate to 4 per 1000 effectives per year. The Confederates, short of quinine, doctors, hospitals and food, suffered much more.

Grant set his first mission the capture of Vicksburg, one of two Confederate strongholds on the Mississippi. For half a year every strategy he could devise failed. At one point he even tried digging a new channel for the river so the fortress would be left high and dry. Aware that political enemies in Washington might get him recalled, Grant kept on the move. Grant's supply lines, based a railroad from Columbus, Kentucky, grew longer and more vulnerable the further south he moved. At least he had supply lines; the Confederates had to live off the land, and also leave enough for their civilians to survive. In December, one rebel cavalry raid cut the railroad from Columbus and another captured Grant's main supply depot at Holly Springs, Mississippi. Grant was forced to pull back to Memphis, rely on the river for supplies, and rethink his strategy. He tried waterborne attacks, which also failed.

Finally in spring, 1863, he realized that his supply lines were a handicap; defending them tied down half his army, and their very existence told the enemy where he would be. He could live off the land too (leaving civilians only two months worth of food) and use freed slaves as laborers. In the most audacious move of the war, Grant circled around Vicksburg from the south and east, and cut loose from his supply lines. He would win the campaign or lose his entire army. Passing Vicksburg was a challenge accepted by the Navy's Commodore David Porter. On April 16, after dark he slipped the Yankee fleet past the 31 heavy guns of Vicksburg, dodging one shell every ten seconds, and absorbing one a minute. All were hit repeatedly, but were saved by their thick iron armor (one sank). A week later a flotilla of Army steamers made the same run (manned by soldiers, as the civilian crews declined the job.) Grant's army marched south in roundabout fashion, then was ferried by Porter to the east bank of the Mississippi. When Grant sent 1,700 cavalry under Colonel Grierson on a hugely successful 600-mile raid through the length of Mississippi, the Confederates lost their telegraph, their railroads and their knowledge of where Grant's army was.

In a masterful display of strategic maneuver against a divided enemy, Grant marched 130 miles in ten days, won four battles, and laid a tight siege on Vicksburg. Grant had systematically destroyed railroads and bridges behind him, so that Johnston's Confederate army could not relieve the siege. Washington assisted by rushing in reinforcements hurriedly pulled off garrison and anti-guerrilla duty. Vicksburg, under siege for 48 days, was on the verge of starvation; it surrendered on July 4, 1863, with 30,000 prisoners. Grant paroled the prisoners, many of whom promptly rejoined the rebel army; other had enough and went home to stay.

Five days later Port Hudson, the last fortress on the Mississippi, surrendered after a 47 day siege of its own, and the Confederacy was cut in twain.

In defying the strategic law that armies had to maintain and protect their supply lines, Grant not only ignored Halleck in Washington and disregarded the advice of his top aid General Sherman, he violated one of the geometrical principles of warfare as expounded by the leading European theorist, Baron Antoine Jomini. (Grant admitted he had never bothered to read Jomini.) Jomini depicted warfare primarily as a matter of capturing key localities and winning battles by maneuver and timing. His mathematical models fascinated smart engineers like Halleck (3rd out of 31 in his West Point class), McClellan (2nd out of 59) Lee (2/46) and Sherman (6/42); luckily for Grant, he graduated so low in his West Point class (21/39) that he was ineligible to join the engineers.

Jomini's principles ignored the broader political question of national ability and will to fight, and downplayed practical matters of manpower, training, intelligence, logistics and weaponry. Grant concluded instead that, "there are no fixed laws of war which are no subject to the conditions of the country, the climate, and the habits of the people." The epiphany hit Sherman on May 18, when he stood with Grant overlooking the Mississippi; they had circled Vicksburg and reestablished their supply line. Sherman became an avid convert to Grant's radical methods. To win the war, they decided, they had to break the Confederacy's ability and will to resist, while winning enough battles to maintain morale in the army and on the homefront.

Lincoln understood that Grant had the answer. He first gave Grant command in the west, then in early 1864 demoted Chief of Staff Halleck to clerical chores and put Grant in overall charge of military strategy, with Sherman in command of the western theater.

Confederate general Stephen Dill Lee worked tirelessly in the 1880s-1890s to create a national military park at Vicksburg, Mississippi, a shrine to commemorate the campaign and the men on both sides who fought in it. Lee's motives were to honor the soldiers of both sides, which would help ease the pain of defeat for the Confederates and also serve as a step toward national reconciliation. A tight-fisted Congress repeatedly refused to fund the project, however, until the conclusion of the Spanish-American War loosened purse strings and encouraged patriotic sentiments. Lee served as the first supervisor of the Vicksburg National Military Park, a position that required him to acquire land, correspond with veterans of the battle, and plan the placement of monuments, cannons, and other attractions.

All content from Kiddle encyclopedia articles (including the article images and facts) can be freely used under Attribution-ShareAlike license, unless stated otherwise. Cite this article:
Vicksburg Campaign Facts for Kids. Kiddle Encyclopedia.