The Lancaster Arts Hotel is a hotel in Lancaster, Pennsylvania, housed in a historic tobacco warehouse.

Originally, the hotel site was built in the 1880s as a tobacco warehouse and was used that way until 1945. It then was used by a paper and twine business as well as an electronics business before being transformed into the hotel. The hotel is listed on the National Register of Historic Places as a contributing property to the Harrisburg Avenue Tobacco Historic District. Lancaster Arts Hotel is a member of Historic Hotels of America, the official program of the National Trust for Historic Preservation.

The hotel also has an art gallery featuring rotating exhibitions by regional artists. Included in the gallery is a room paying homage to Lancaster sculptor Blanche Nevin whose sculpture of Peter Muhlenberg is housed in the National Statuary Hall Collection at the U.S. Capitol Building. Another room features the work of Watercolor Painter Charles Demuth. Other artists who have been exhibited at the hotel include Warren Rohrer and David Brumbach. 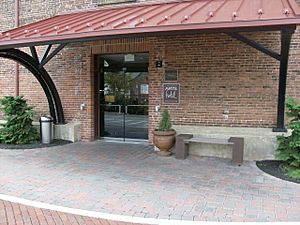 All content from Kiddle encyclopedia articles (including the article images and facts) can be freely used under Attribution-ShareAlike license, unless stated otherwise. Cite this article:
Lancaster Arts Hotel Facts for Kids. Kiddle Encyclopedia.