Ephrata (English: EF-rə-tə, Pennsylvania German: Effridaa) is a borough in Lancaster County, Pennsylvania, United States, 38 miles (61 km) south east of Harrisburg and about 57 miles (92 km) west by north of Philadelphia. It is named after Ephrath, a biblical town in what is now Israel. Ephrata's sister city is Eberbach, Germany, the city where its founders originated. In its early history, Ephrata was a pleasure resort and an agricultural community. 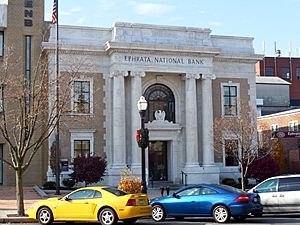 Ephrata is noteworthy for having been the former seat of the Mystic Order of the Solitary, a semimonastic order of Seventh-Day Dunkers. The community, which contained both men and women, was founded by Johann Conrad Beissel in 1732.

Many of the members were well-educated; Peter Miller, second prior of the monastery, translated the Declaration of Independence into seven languages, at the request of Congress. At the period of its greatest prosperity the community contained nearly 300 persons.

Like the rest of the county, it is mostly flat land suitable for farming.

The Borough of Ephrata own and operate the Ephrata Community Pool which is located at 418 Vine Street. Currently, the pool is the oldest continuously operated swimming pool in Lancaster County, finishing its 84th year of operation in September 2015. A newly remodeled pool opened on May 26, 2012. This pool contains zero-depth entries, flume slides, and climbing walls among other things.

Ephrata has a diverse mix of churches and faith groups, primarily Christian. 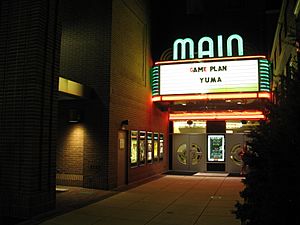 Ephrata has one sister city, as designated by Sister Cities International:

On Sunday, 29 March 2009, a strong storm briefly swept through Ephrata. On 31 March, the National Weather Service confirmed that it was an EF1 tornado. Strong hail came with it. Although there were no fatalities, 30 homes were damaged and 8 mobile homes were destroyed. Many vehicles could be seen on their side afterwards, and holes were put in houses from the hail.

All content from Kiddle encyclopedia articles (including the article images and facts) can be freely used under Attribution-ShareAlike license, unless stated otherwise. Cite this article:
Ephrata, Pennsylvania Facts for Kids. Kiddle Encyclopedia.