Lititz is a borough in Lancaster County, Pennsylvania, six miles (approximately 10 km) north of the city of Lancaster. 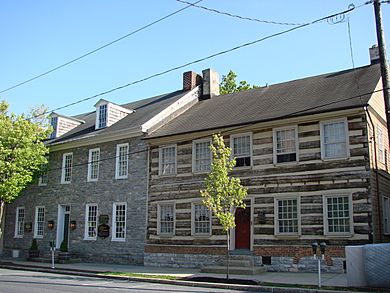 For a century, only Moravians were permitted to live in Lititz. Until the middle of the 19th century, only members of the congregation could own houses; others were required to lease. The lease-system was abolished in 1855, just five years before the beginning of the Civil War. More information can be found in the book A Brief History of Lititz Pennsylvania by Mary Augusta Huevener, published in 1947.

During a part of the American Revolution, the Brethren's House, built in 1759, was used as a hospital. A number of soldiers died and were buried here. Lititz is also home to Linden Hall School, the oldest all-girls boarding school in the United States. Located adjacent to the Moravian Church on 47 acres (19 ha) of land, Linden Hall School was founded by the Moravians in 1746, a decade before the borough was incorporated.

Lititz has been holding a town-wide celebration of Independence Day since 1813. This annual spectacle attracts many tourists and former residents that return for the annual Queen of Candles Pageant and fireworks display in Lititz Springs Park. The park itself is decorated each year, rather extravagantly, with wooden beams and trestles placed from side to side of the stone-walled stream and stretching nearly the entire length of the park. The trestles are fitted sockets for white candles to be placed and lit during the celebration. The first candle has traditionally been lit by the year's Queen of Candles pageant winner. Musical performances by such groups as "Flamin' Dick and the Hot Rods" then follow. The park also hosts festivities for children and a plethora of food offerings comparable to those at a county fair. The 4th of July parade is sponsored by Lititz Lions. Another summer event is the annual art show sponsored by the Village Art Association of Lititz and the craft show sponsored by the Lititz Rotary Club, which extends from the Lititz Springs Park out into Broad Street (PA-501) and Main Street (PA-772). Annually, the Saturday before Columbus Day is Chocolate Walk, a much-anticipated downtown event hosted by the Kiwanis Club of Lititz Area.

During 2006 a year-long celebration was held commemorating the 250th anniversary of the naming of the town. Some of the major events included a service and commemoration ceremony in Lititz Springs Park on Sunday June 11, the official naming ceremony on Monday June 12, a fountain show in the park called "Symphonic Springs" during August 20–26th, and a New Year's celebration.

Lititz is often named in lists of "delightfully-named towns" in Pennsylvania Dutchland, along with Intercourse, Blue Ball, Mount Joy, Bareville, Bird-in-Hand and Paradise.

Pennsylvania Routes 772 (Orange and Main Streets) and 501 (Broad Street) run through the town.

According to the United States Census Bureau, the borough has a total area of 2.3 square miles (6.0 km2), all land.

A Sister City relationship between Lititz and Kunvald (Czech Republic) was established on June 11, 2006, during the celebration of the 250th anniversary naming of Lititz. The ceremony took place in Lititz Springs Park. Their Pennsylvania sister city is Emmaus.

All content from Kiddle encyclopedia articles (including the article images and facts) can be freely used under Attribution-ShareAlike license, unless stated otherwise. Cite this article:
Lititz, Pennsylvania Facts for Kids. Kiddle Encyclopedia.