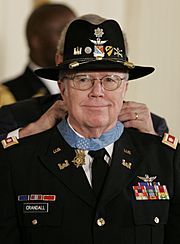 Bruce Perry Crandall (born February 17, 1933) is a retired U.S. Army officer who was born in Crandall in Olympia, Washington.. He received the Medal of Honor for his actions during the Battle of Ia Drang.

During the battle he flew 22 missions in an unarmed helicopter into enemy fire to bring ammunition and supplies and evacuate the wounded. By the end of the Vietnam War, he had flown over 900 combat missions.

He studied at the University of Washington. After retiring from the Army he worked several jobs in different states before settling down with his wife in his home state of Washington. Crandall was married to Arlene Louise from 1956 until her death in 2010.

All content from Kiddle encyclopedia articles (including the article images and facts) can be freely used under Attribution-ShareAlike license, unless stated otherwise. Cite this article:
Bruce P. Crandall Facts for Kids. Kiddle Encyclopedia.