Dunsmuir is a city in Siskiyou County, northern California. It is on the upper Sacramento River in the Trinity Mountains.

The official city slogan is "Home of the best water on Earth". Dunsmuir is currently a hub for tourism in Northern California, with Interstate 5 in California passing through it. Visitors enjoy fishing, skiing, climbing, or sight-seeing. During the steam locomotive railroad era, it was notable for being the site of an important Central Pacific (and later Southern Pacific) railroad yard, where extra steam locomotives were added to assist trains on the grade to the north. 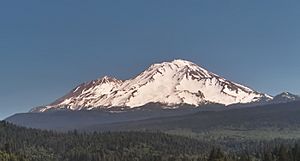 Mount Shasta as viewed from Dunsmuir 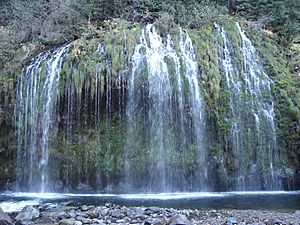 Sites in and near Dunsmuir have been inhabited for over 5000 years. At least three waves of early peoples swept through area, establishing residence. At the time of the first European-American contact in the 1820s, the site of Dunsmuir was within the range of the Okwanuchu tribe of Native Americans. Some believe the indigenous peoples of the area were wiped out when the U.S. Army fed them poisoned beef when they came in and signed a peace treaty. However, this point remains open to speculation, as there are few concrete sources of evidence to support this claim.

During the 1820s, early European-American hunters and trappers passed through Dunsmuir's site, following the Siskiyou Trail. In the mid-1830s, pioneer horse and cattle drives came up the Sacramento Canyon, delivering livestock from Mexican California to the new settlements in the Oregon Country to the north. In 1841, an overland party of the famous United States Exploring Expedition passed through the area.

The California Gold Rush led to increased traffic along the Siskiyou Trail through Dunsmuir's site, leading to the first non-Native American settlers at Upper Soda Springs in north Dunsmuir in the early 1850s. The discovery of gold at Yreka, California dramatically increased movement through the site of Dunsmuir, and a toll bridge and stagecoach hotel were built at Upper Soda Springs.

In 1887, the completion of the Central Pacific Railroad along the line of the Siskiyou Trail led to the creation of the modern town of Dunsmuir. The railroad developed a division point on the flats south of Upper Soda Springs, where railroad steam engines would be serviced, and added to trains to push them up the steep grades north of town. A roundhouse and turntable were built. All this activity required the creation of a town, initially known as 'Poverty Flats' or 'Pusher'. South of the present downtown and north of Castella is an area known as Nutglade, which was previously known as Dunsmuir and before that, Cedar Flat. So the name moved north from the South rail yard to the main rail yard. During the railroad heyday, Dunsmuir was the largest town in this County which is the size of Delaware and Rhode Island combined.

In 1888, Alexander Dunsmuir, second son of British Columbian coal baron Robert Dunsmuir, was passing through, and according to contemporary accounts, was so taken with the beauty of the area that he offered to donate a fountain to the new town, if they would rename the town in his honor. The offer was accepted, and Dunsmuir's fountain remains operational, relocated to the City Park's baseball field, that was frequented by Babe Ruth and other N.Y. Yankees.

By the early 1900s, Dunsmuir was the largest town in Siskiyou County, and for a long time had been the largest California city north of Sacramento. The construction of the Pacific Highway along the Siskiyou Trail in the mid-1910s brought more tourists. By the mid-1950s, the railroad transitioned from steam to diesel locomotives, and the substantial workforce in Dunsmuir was not needed, resulting in the town's contraction. Interstate 5 runs through the canyon along with the railroad and the upper Sacramento River. 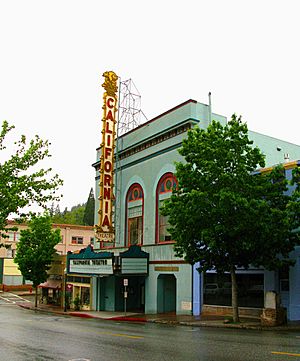 As a result, Dunsmuir retains today much of the charm and scale of the 1920s and 1930s, and has been designated on the National Register of Historic Places. The downtown area is now a designated historic district. The painted signage is remarkable. The California Theater, currently under renovation, is unique in that after fifty years without an organ, they were able to acquire and re-install their original Wurlitzer instrument. 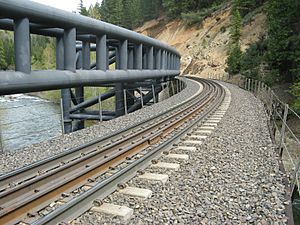 Site of the 1991 spill. Guardrail on left was constructed after the spill.

On the night of July 14, 1991, a Southern Pacific train derailed into the upper Sacramento River at a horseshoe curve of track known as the Cantara Loop, upstream from Dunsmuir. Several cars made contact with the water, including a tank car. On the morning of July 15, it became apparent that the tank car had ruptured and spilled its entire contents into the river - approximately 19,000 gallons of a soil fumigant - metam sodium. Ultimately, over a million fish, and tens of thousands of amphibians and crayfish were killed. Millions of aquatic invertebrates, including insects and mollusks, which form the basis of the river’s ecosystem, were destroyed. Hundreds of thousands of willows, alders, and cottonwoods eventually died. Many more were severely injured. The chemical plume left a 41-mile wake of destruction, from the spill site to the entry point of the river into Shasta Lake. The accident still ranks as the largest hazardous chemical spill in California history.

Dunsmuir has numerous parks located throughout the city, with multiple city parks currently under development and improvement.

Dunsmuir City Park and Botanical Gardens is a 10-acre (4.0 ha) municipal park and botanical garden maintained by Dunsmuir Botanical Gardens Inc., a non-profit 501(c)(3) organization of volunteers within Dunsmuir City Park. It requires public support to maintain the Gardens, which are on City of Dunsmuir property under the general control of Siskiyou County, via the Board of Directors of the Dunsmuir Park & Recreation District. In 1924, New York Yankees Babe Ruth and Bob Meusel visited the park as part of a barnstorming tour, playing an exhibition baseball game against Dunsmuir locals. The original grandstand was recently repaired and repainted after suffering damage in a winter storm. There is a plaque commemorating the event outside the grandstand.

Tauhindauli Park and Trail is on the former site of Upper Soda Springs resort along the Sacramento River canyon. It consists of approximately 10 acres (4.0 ha) of level ground on the bank of the river, the surrounding hillsides, and continues north along the eastern bank of the Sacramento River to the Dunsmuir City Park, in the heart of Dunsmuir. Long a favorite local fishing spot, swimming hole, and a site of both historical and ecological significance, this special place has finally received the attention it deserves and has been improved to enhance its recreational opportunities and esthetics. Environmental work and levee restructuring has improved flood control for the entire town.

The Tauhindauli river restoration project has created a natural park with pathways winding through native grasses and plants, with fishing access and picnic areas. For ecological and flood-control purposes, riparian forests and meadows have been restored close to their original condition. Levees have been moved and built up for maximum protection for the park from river erosion and to restore the watershed to the natural habitat which provides food for animals. The Park can be accessed from River Avenue. to the south and Stagecoach Road to Upper Soda Springs Road in the canyon.

Tuahindauli Park and Trail is a project of the Dunsmuir Garden Club. Funding for this project comes principally from the Cantara Trustee Council and the Department of Fish and Wildlife. 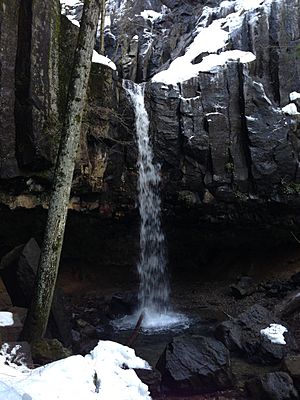 Shasta Springs was the name of a popular summer resort on the Upper Sacramento River, during the late Nineteenth Century and early Twentieth Century. It was located just north of the City of Dunsmuir, California and just north of Upper Soda Springs along the Siskiyou Trail in northern California

Upper Soda Springs is on the banks of the Sacramento River in Dunsmuir, California. It consists of approximately ten acres (40,000 m²) of level ground on both sides of the River, the surrounding hillsides, and continues north along the eastern bank of the Sacramento River to the Dunsmuir City Park. The State of California and the City of Dunsmuir are creating a new park on this historic site. The Upper Soda Springs site contains a riparian ecosystem and includes its namesake mineral water springs. In large part because of its location on the Siskiyou Trail, the site mirrors the history of the state and of the American West.

Mossbrae Falls is a waterfall flowing into the Upper Sacramento River, in the Shasta Cascade area in Dunsmuir, California. The falls are located just south of the lower portion of Shasta Springs. Access to the falls via a mile-long hiking trail on the Union Pacific Railroad tracks is currently closed, as Union Pacific and the City of Dunsmuir figure out a safer route to the falls.

Hedge Creek Falls is a waterfall on hedge creek, in the Shasta Cascade area in Dunsmuir, California. There is a small cave located behind the waterfall, allowing visitors to walk behind the cascading water. Shortly after the waterfall, hedge creek flows into the Sacramento River south of Mossbrae Falls. There is a viewing platform over the river, with a view of Mount Shasta. Access to the waterfall and viewing platform is via a short hiking trail. The trail starts at a small park off the Dunsmuir Ave/Siskiyou Ave exit on Interstate 5. The close proximity to Interstate 5 makes the waterfall a very popular stopping point for passing motorists.

At an elevation of approximately 2,350 feet (720 m) above sea level, a unique setting is created by the Sacramento River in which class 3 whitewater rapids are usually created during summer run off through a town of about 2,000 residents. In plain view from some of the city's public streets, this may be one of the few places in western North America where three categories of "twos" (population, elevation, and whitewater difficulty) are met or eclipsed. (Eastern US example-The Cherry River at Richwood, WV)

Mt. Shasta's lava layers filter the drinking water and eliminate the need for filtration or treatment; thus the town's marketing slogan, "Home Of The Best Water On Earth". Three water fountains are located on Dunsmuir Avenue in the Historic District. Two of the fountains previously ran 24 hours a day, however have since been changed in 2015 to only flow on demand due to water conservation measures placed on the state of California by Governor Jerry Brown.

There were 867 households out of which 23.6% had children under the age of 18 living with them, 43.1% were married couples living together, 10.3% had a female householder with no husband present, and 43.3% were non-families. 35.4% of all households were made up of individuals and 16.4% had someone living alone who was 65 years of age or older. The average household size was 2.22 and the average family size was 2.84. 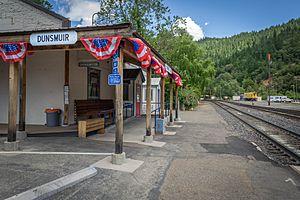 The Amtrak station in Dunsmuir, California

Amtrak's Coast Starlight stops daily in both directions at the Dunsmuir Amtrak station, located on one of Dunsmuir's two commercial streets, both in the historic district. This is the only stop in Siskiyou County, and the northernmost Amtrak station in California, located at a midpoint between Redding and Klamath Falls, Oregon. The County bus service, the Stage, from Dunsmuir north through the County (Mt. Shasta, Weed, Yreka, etc.) connects to Amtrak. The station is maintained by city residents and local rail enthusiasts, and includes a museum, telephones, restrooms and shelter from the weather. The town itself is a railroad museum with an operating turntable.

The city is bisected by Interstate 5, linking Yreka and Oregon to the north, and Redding and Sacramento to the south. Dunsmuir Municipal-Mott Airport is the city-owned public-use airport, located 3 nautical miles (5.6 km; 3.5 mi) north of the central business district.

All content from Kiddle encyclopedia articles (including the article images and facts) can be freely used under Attribution-ShareAlike license, unless stated otherwise. Cite this article:
Dunsmuir, California Facts for Kids. Kiddle Encyclopedia.