The Trinity Alps are a mountain range in Siskiyou County and Trinity County, in Northern California. They are a subrange of the Klamath Mountains and located to the north of Weaverville.

The Trinity Alps are within the Pacific Coast Ranges physiographic region, in the Klamath Mountains System, which lies between the California Coast Ranges to the west and the Cascade Range to the east. Elevations range from 1,350 feet (411 m) to 9,001 feet (2,744 m) on Thompson Peak. Other notable peaks include Granite Peak (8,094 feet (2,467 m)) and Ycatapom Peak (7,593 feet (2,314 m)). The Trinity Alps are noted for their scenic views and alpine environment. The range's alpine flora differs from that found in the Sierra Nevada or the Cascades. Within the Klamath Mountains, adjacent subranges of the Trinity Alps include the Salmon Mountains and Scott Mountains.

The Trinity Alps Wilderness covers 517,000 acres (2,090 km2), making it the second largest wilderness area in California. The area was formerly known as the Salmon-Trinity Alps Primitive Area since 1932 until a series of expansions.

The lowest snowfield in California that does not disappear except in the extreme runs of dry years is located above Mirror Lake at an elevation of 6,600 ft (2,000 m).

The only unambiguous glacier is the Grizzly Glacier, a 15-acre (61,000 m2) icefield on the north side of Thompson Peak, which shows crevasses indicating true motion even on so small an icefield. 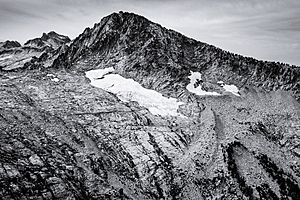 The Grizzly Glacier below the north face of Thompson Peak.

Research has shown that some glaciers in the Trinity Alps are more resistant to the effects of global warming than are other California glaciers. According to recent, but incorrect, USGS maps, 35 permanent bodies of snow and several tiny glaciers dot the highest peaks of the Alps.

On the ridge south of Sapphire Lake is an unusual phenomenon consisting of a temporary glacier, versus an inactive snowfield that melts out in dry years. Following years of heavy accumulation, an icefield appears in this fully sheltered north-facing cirque that can show active crevasses and seracs some tens of feet high. But this ice body, at an elevation of only 7,500 ft (2,300 m) in a region experiencing a long, hot dry season from about mid May to mid October, can disappear completely during a run of drier years.

Studies of lichen collars indicate that the site near Kalmia Lake is the snowiest spot in the State of California, receiving snow accumulation in excess of the Lake Helen snowcourse on Lassen Peak, by far the snowcourse with greatest late winter snow accumulation in California. This in turn is consistent with the fact of an active glacier under Thompson Peak, while, in contrast, no such active glacier exists under Brokeoff Mountain west of Lassen Peak, higher than Thompson Peak and presenting an ideal NNE-facing zone in the area of maximum snow accumulation beneath an almost-vertical cliff face 1,000 ft (300 m) high. Sufficient snow does accumulate under Brokeoff that in some years the snowfield there experiences incipient glacial motion. Two moraines below it, one very recent, provide clear evidence at least of mass transport in the recent past at that site. These moraines are quite a bit smaller than those found below the Thompson Peak glacieret.

The Trinity Alps section of the Klamath Mountains Ecoregion is botanically outstanding by having the second greatest number of conifer species of any place in the world. Russian Peak, in the Russian Wilderness just north of the Trinity Alps, has the greatest number of conifer species in North America. So many genera and species of conifers exist together because the Trinity Alps are at the intersection of the Mediterranean climate of the south and the Northwestern coastal climate, which has a shorter dry season.

Other plants along the trails include the carnivorous California pitcher plant (Darlingtonia californica), the showy pinkish Lewisia cotyledon, and the rare Trinity Alps endemic wildflower Trinity penstemon (Penstemon tracyi). Sagebrush is found on ridges in the Scott Mountains.

Most of the lakes have been stocked with rainbow, brown or brook trout, and some have self-sustaining populations. The major streams of the North Fork Trinity River and New River watersheds have spawning chinook salmon, and some have steelhead.

Geologically, the Trinity Alps consist of a mixture of igneous, granite and metamorphic peaks. In the eastern mountains are the Red Trinities, due to reddish ultramafic peridotite, in the central granitic batholith are the White Trinities, and in the western mountains are the Green Trinities due to more extensive forest cover. The region contains much pine and fir forest as well as meadows, creeks, and lakes. 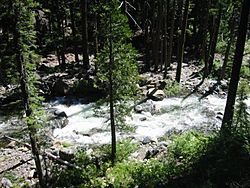 The US Forest Service, Shasta-Trinity National Forest, manages most of the Trinity Alps Wilderness. The northern boundary extends into the Klamath National Forest, and the western boundary extends into the Six Rivers National Forest. There are also private inholdings, especially in the eastern portions. The wilderness contains hiking trails, backcountry camping, and scenery. Access is off California State Route 299 on the south, CA Route 3 on the east, and various old logging and mining roads on the north and west. Wilderness permits are required for hiking. The Pacific Crest Trail connects the northeast corner of the Trinity Alps to the Russian Wilderness and Marble Mountain Wilderness to the north and the Castle Crags Wilderness in the Trinity Divide to the east.

Less-visited areas include New River, Salmon Mountain, Horse Linto Creek, Pony Buttes, and Limestone Ridge in the west, and Packers Peak, Deadman Peak, and Eagle Peak in the Scott Mountains. Most of the area is visited much less heavily than many other wilderness areas in California, such as in the High Sierra of Yosemite National Park and Kings Canyon National Park, but more heavily than the nearby Yolla Bolly-Middle Eel Wilderness. 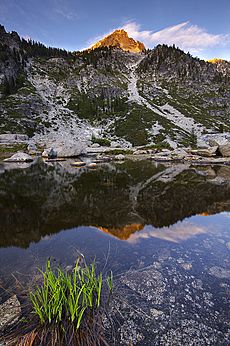 The most popular destinations beyond the trailheads are Canyon Creek Lakes, Emerald and Sapphire Lakes on the Stuart Fork, and Granite Lake on the Swift Creek trail. The western ridges are mostly lower in elevation with fewer lakes, and ridgetop trails there can be hot and dry in the summer. Trails do not reach all of the lakes; cross-country routes are possible.

The Trinity Alps overlook Trinity Lake to the east, a large reservoir of the federal Central Valley Project on the Trinity River. Hunting occurs for deer, bear, and bandtailed pigeon in season. Rock climbing is excellent in the areas with granite cliffs, such as Caribou Peak and Sawtooth Ridge.

All content from Kiddle encyclopedia articles (including the article images and facts) can be freely used under Attribution-ShareAlike license, unless stated otherwise. Cite this article:
Trinity Alps Facts for Kids. Kiddle Encyclopedia.