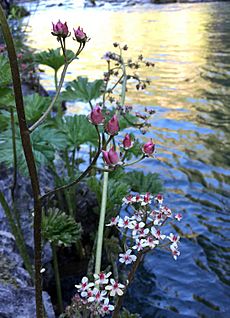 Indian rhubarb (Darmera peltata), on the edge of the McCloud River in May.

The McCloud River is a 77.1-mile (124.1 km) long river that flows east of and parallel to the upper Sacramento River, in Siskiyou County and Shasta County in northern California in the United States. Protected under California's Wild and Scenic Rivers Act (1972), it drains a scenic mountainous area of the Cascade Range, including part of Mount Shasta. It is a tributary of the Pit River, which in turn flows into the Sacramento River. The three rivers join in Shasta Lake, formed by Shasta Dam north of Redding.

The river was originally known as the "McLeod River", after the Hudson's Bay Company hunter and trapper Alexander Roderick McLeod who explored it during the winter of 1829-1830. By the 1860s, the spelling "McCloud" was widely used, likely because that was the conventional American spelling of the Scottish name, and perhaps in part to honor California pioneer Ross McCloud, who settled here in 1855.

The McCloud River watershed drains 674 square miles (1,750 km2). It rises from several spring-fed streams in Colby Meadows in the Cascades approximately 10 miles (16 km) southeast of Mount Shasta in Siskiyou County. It flows initially west, passing south of Mount Shasta and receiving streams that drain the southern slope of the peak. East of McCloud it forms a series of waterfalls which tumble over basaltic lava flows, known collectively as the McCloud River Falls or Falls of the McCloud River. 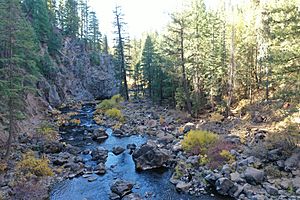 Below the falls the river flows generally south-southwest through the Lake McCloud reservoir and through a deep canyon in the Shasta-Trinity National Forest. It joins Shasta Lake, formed by the Shasta Dam, approximately 15 miles (24 km) north of Redding, with the lower 10 miles (16 km) of the river forming the middle arm of the lake. The McCloud arm joins the Pit River arm just east of the Pit River Bridge on Interstate 5, 5 miles (8.0 km) north of the city of Shasta Lake.

The river is dammed at McCloud River Dam, to provide water for the McCloud-Pit Hydroelectric Project. The McCloud Tunnel diverts water from the McCloud River east to Iron Canyon Reservoir; the water is discharged into the Pit River at James B. Black Powerhouse. Further downstream, the diverted water boosts power generation at Pit 6 and Pit 7 Dams before flowing into Shasta Lake. The overall generating capacity is 364 megawatts. Built in the late 1960s, the system is owned and operated by PG&E.

The last several miles of the McCloud comprise two private fishing clubs — the McCloud River Club (4 miles (6.4 km)) and the Bollibokka Club (10 miles (16 km)), founded in 1902 and 1904, respectively. The land encompassing the lower 7 miles (11 km) of Bollibokka Club was purchased in 2007 by the Westlands Water District, which continues to operate the historic Bollibokka Club. Westlands purchased the property to avoid risk of development of the property, to increase its entitlement to water releases from Shasta reservoir through ownership of 3,000 acres (12 km2) in the watershed, and to quell opposition to plans for increases in the height of Shasta Dam, a project in which it is the largest stakeholder. The upper 3 miles (4.8 km) of the club's river holdings were purchased in 2006 by Silicon Valley real estate magnate John Arrillaga. Anglers are not allowed to set foot above the high water mark on either property. The Nature Conservancy has a site on the Lower McCloud, an outright gift from the neighboring McCloud River Club, that allows ten rods per day and unlimited hikers or birders.

There are two campgrounds on the Lower McCloud River — Ash Camp and Ah Di Nah Campground. Ash Camp is a small unimproved camp area about 1 mile (1.6 km) downstream of the McCloud Reservoir dam with 4 sites and a vault toilet. It sits at the junction of Hawkins Creek and the Lower McCloud.

While Ah Di Nah Campground is located only 3 miles (4.8 km) further downstream from Ash Camp, it is about 7 miles (11 km) of dirt road driving to get there. It is a Shasta-Trinity National Forest campground and a fee is charged for nightly camping. Ah Di Nah is popular with backpackers and anglers for its proximity to the Pacific Crest Trail and the Nature Conservancy area on the McCloud River. Bathrooms and water are available.

The McCloud once hosted a native population of bull trout (Salvelinus confluentus), but the species became extinct in the McCloud watershed after McCloud Reservoir cut off the fish from their spawning grounds. The last reported Bull trout (misidentified as Dolly Varden trout (Salvelinus malma) at that time, Dollys are not from this southern latitude) was caught in the 1980s.

The Upper McCloud and its tributaries above Middle Falls are home to the McCloud River redband (Oncorhynchus mykiss stonei), a native subspecies of rainbow trout. These redband trout were proposed for endangered species status, as their genetics have been introgressed by hybridization with hatchery stocked rainbow trout. The Falls of the McCloud River form a natural barrier to rainbow trout migration historically. An amplified fragment length polymorphism study show Sheepheaven Creek (the type specimen) genetics to be sufficiently different to warrant subspecific status. Conservation efforts have included transplanting the relative pure Sheepheaven Creek strain into Swamp and Trout Creeks.

All content from Kiddle encyclopedia articles (including the article images and facts) can be freely used under Attribution-ShareAlike license, unless stated otherwise. Cite this article:
McCloud River Facts for Kids. Kiddle Encyclopedia.