Kids Encyclopedia Facts
Not to be confused with Eureka, California.

Yreka ( wy-REE-kə) is the county seat of Siskiyou County, California, United States, near the Shasta River; the city has an area of about 10 square miles (26 km2), most of it land. As of the 2010 United States Census, the population was 7,765, reflecting an increase of 475 from the 7,290 counted in the 2000 Census. Yreka is home to the College of the Siskiyous, Klamath National Forest Interpretive Museum and the Siskiyou County Museum.

In March 1851, Abraham Thompson, a mule train packer, discovered gold near Rocky Gulch while traveling along the Siskiyou Trail from southern Oregon. By April 1851, 2,000 miners had arrived in "Thompson's Dry Diggings" to test their luck, and by June 1851, a gold rush "boomtown" of tents, shanties, and a few rough cabins had sprung up. Several name changes occurred until the little city was called Yreka. The name comes from the Shasta language /wáik'a/, for which Mount Shasta is named. The word means "north mountain" or "white mountain".

Harte had arrived in California in the [eighteen-]fifties, twenty-three or twenty-four years old, and had wandered up into the surface diggings of the camp at Yreka, a place which had acquired its mysterious name — when in its first days it much needed a name — through an accident. There was a bakeshop with a canvas sign which had not yet been put up but had been painted and stretched to dry in such a way that the word BAKERY, all but the B, showed through and was reversed. A stranger read it wrong end first, YREKA, and supposed that that was the name of the camp. The campers were satisfied with it and adopted it.

Poet Joaquin Miller described Yreka during 1853–1854 as a bustling place with "... a tide of people up and down and across other streets, as strong as if a city on the East Coast". Incorporation proceedings were completed on April 21, 1857.

In November 1941, Yreka was designated as the capital of the proposed State of Jefferson, a secession movement along the Oregon and California border. 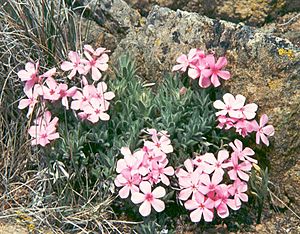 The Yreka Phlox (Phlox hirsuta) is the city's official flower.

Yreka is located at approximately 2,500 feet (760 m) above sea level in the Shasta Valley, south of the Siskiyou Mountains and north of Mount Shasta, a 14,000 ft (4,300 m) dormant volcano which towers over the valley.

The official city flower of Yreka is the Yreka phlox (Phlox hirsuta).

The only known specimen of Calochortus monanthus, the single-flowered mariposa lily, was collected near Yreka along the banks of the Shasta River by botanist Edward Lee Greene, in June 1876.

"Yreka Bakery" is a palindrome. The loss of the “B” in a bakery sign read from the reverse is mentioned as a possible source of the name Yreka in Mark Twain’s autobiography. The original Yreka Bakery was founded in 1856 by baker Frederick Deng. The palindrome was recognized early on: “spell Yreka Bakery backwards and you will know where to get a good loaf of bread” is quoted as an ad in the Yreka Semi-Weekly Journal May 23, 1863 and states that twelve loaves sold for $1. The Yreka Bakery moved eventually to its long-time location, 322 West Miner Street, where it remained under several ownerships until it closed in 1965 on retirement of the baker "Martin", and clerk Alta Hudson. The historic building, the Brown-Nickell-Authenrieth Building, 322–324 West Miner Street, currently houses a restaurant. 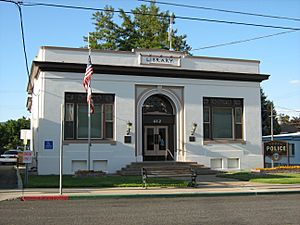 Tourists visit Yreka because it is at the northern edge of the Shasta Cascade area of northern California. The core of the historic downtown, along West Miner Street, is listed as an historic district on the National Register of Historic Places, as well as a California Historical Landmark. Yreka is home to the Siskiyou County Museum and a number of Gold Rush-era monuments and parks. Visitors also come to enjoy trout fishing in the nearby Klamath, Sacramento and McCloud Rivers, or to see and climb Mount Shasta, Castle Crags or the Trinity Alps. Visitors also ski (both alpine and cross-country), or bike or hike to the waterfalls, streams and lakes in the area, including nearby Falls of the McCloud River, Burney Falls, Mossbrae Falls, Lake Siskiyou, Castle Lake and Shasta Lake.

The town hosts Gold Rush Days every year in June.

In addition, because it is the county seat of Siskiyou County, a number of businesses related to the county courts, county recorder, and other official county functions are in the city. Butte Valley National Grassland is in northern Siskiyou County, near the Oregon border, but is administered from Yreka offices.

Yreka is home to a branch campus of the College of the Siskiyous which hosts the Rural Health Science Institute and Administration of Justice programs. The college is one of 10 California community colleges to offer on-campus housing. High-school buses carry students from towns that would not otherwise be able to fund a secondary education.

In Yreka, the gold-mining era is commemorated with a gold museum, as well as with a remnant of a silver mining operation in Greenhorn Park. The Yreka Union High School District sports mascot is a gold miner. School colors are red and gold. Yreka High School was the first high school in the county, founded in 1894. It has 11 feeder districts that serve the approximately 1,200 square miles (3,100 km2) county area.

The Yreka elementary school district is composed of Evergreen Elementary as well as the Jackson Street Middle School.

Interstate 5 is the primary north–south route through Yreka, connecting Redding and Sacramento to the south and the Oregon border to the north. Interstate 5 through the city follows the former path of the Siskiyou Trail, which stretched from California's Central Valley to Oregon's Willamette Valley.

General aviation uses the Montague Airport in Montague, 6 miles (9.7 km) to the east.

All content from Kiddle encyclopedia articles (including the article images and facts) can be freely used under Attribution-ShareAlike license, unless stated otherwise. Cite this article:
Yreka, California Facts for Kids. Kiddle Encyclopedia.