Joseph J. Pulitzer (born József Pulitzer April 10, 1847 – October 29, 1911) was a newspaper publisher of the St. Louis Post-Dispatch and the New York World. He became a leading national figure in the Democratic Party and was elected congressman from New York. He crusaded against big business and corruption, and helped keep the Statue of Liberty in New York.

In the 1890s the fierce competition between his World and William Randolph Hearst's New York Journal caused both to develop the techniques of yellow journalism, which won over readers with sensationalism, crime and graphic horrors. The wide appeal reached a million copies a day and opened the way to mass-circulation newspapers that depended on advertising revenue (rather than cover price or political party subsidies) and appealed to readers with multiple forms of news, gossip, entertainment and advertising.

Today, his name is best known for the Pulitzer Prizes, which were established in 1917 as a result of his endowment to Columbia University. The prizes are given annually to recognize and reward excellence in American journalism, photography, literature, history, poetry, music and drama. Pulitzer founded the Columbia School of Journalism by his philanthropic bequest; it opened in 1912. 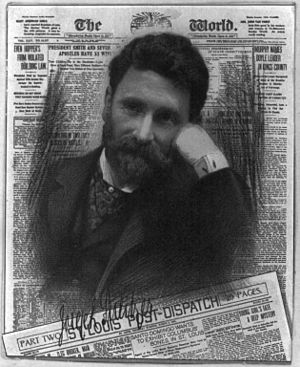 By 1883, Pulitzer had made a lot of money. In that year, he bought the New York World. That newspaper had been losing $40,000 a year. He paid $346,000 to Jay Gould, the owner. Pulitzer changed its focus to human-interest stories, scandal, and sensationalism. In 1885, he was elected to the U.S. House of Representatives, but resigned after a few months' service. He did not like politics . In 1887, he recruited the famous investigative journalist Nellie Bly. In 1895 the World introduced the popular Yellow Kid comic by Richard F. Outcault. This was the first newspaper comic printed with color. Under Pulitzer's leadership circulation grew from 15,000 to 600,000, making the New Your World the largest newspaper in the country.

In 1892, Pulitzer offered Columbia University's president, Seth Low, money to set up the world's first school of journalism. The university initially turned down the money. In 1902, Columbia's new president Nicholas Murray Butler was more receptive to the plan for a school and prizes, but it would not be until after Pulitzer's death that this dream would be fulfilled. Pulitzer left the university $2 million in his will, which led to the creation in 1912 of the Columbia University Graduate School of Journalism. Columbia's Graduate School of Journalism remains one of the most prestigious in the world. 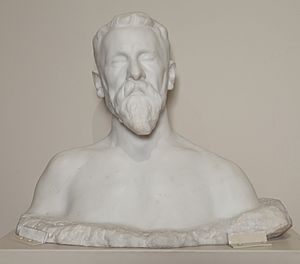 While traveling aboard his yacht to his winter home at the Jekyll Island Club on Jekyll Island, Georgia in 1911, Pulitzer had his yacht stop in Charleston Harbor, South Carolina. On October 29, 1911, Pulitzer listened to his German secretary read aloud about King Louis XI of France. As the secretary neared the end, Pulitzer said in German: "Leise, ganz leise" (English: "Softly, quite softly"), and died. His body was returned to New York for services, and he was interred in the Woodlawn Cemetery in The Bronx.

All content from Kiddle encyclopedia articles (including the article images and facts) can be freely used under Attribution-ShareAlike license, unless stated otherwise. Cite this article:
Joseph Pulitzer Facts for Kids. Kiddle Encyclopedia.