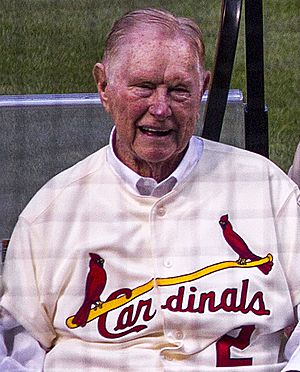 Schoendienst was born in Germantown, Illinois. As a teenager, he worked for the Civilian Conservation Corps.

Schoendienst remained with the Cardinals as a special assistant coach and he wore a Major League uniform as a player, coach, or manager for 73 consecutive seasons until his death in 2018.

All content from Kiddle encyclopedia articles (including the article images and facts) can be freely used under Attribution-ShareAlike license, unless stated otherwise. Cite this article:
Red Schoendienst Facts for Kids. Kiddle Encyclopedia.