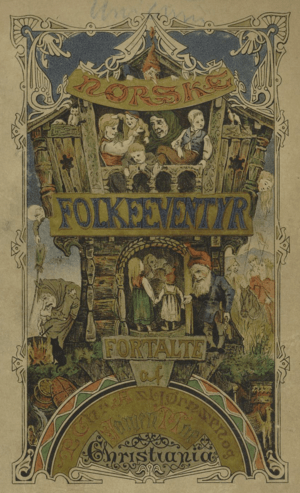 Norwegian Folktales (Norwegian: Norske folkeeventyr) is a collection of Norwegian folktales and legends by Peter Christen Asbjørnsen and Jørgen Moe. It is also known as Asbjørnsen and Moe, after the collectors.

Asbjørnsen, a teacher, and Moe, a minister, had been friends for about 15 years when in 1841 they published the first volume of folktales – the collection of which had been an interest of both for some years. The work's popularity is partly attributable to Norway's newly won partial independence, and the wave of nationalism that swept the country in the 19th century; and the Norwegian written language they contributed to developing (i.e., what would become Bokmål). The language of their publication of the fairy tales struck a balance in that, while it did not preserve their original dialect form in its entirety, it did import certain non-Danish features from it (dialect words and certain syntactic constructions).

Asbjørnsen and Moe were inspired by the German folktale collectors, the Brothers Grimm, not merely to emulate their methodology, but drawing encouragement by it, their endeavor was a work of national importance, especially as the Grimms openly gave high praise for the Norske folkeeventyr. Asbjørnsen and Moe applied the principles espoused by the Grimms, for instance, using a simple linguistic style in place of dialects, while maintaining the original form of the stories. Moreover, Asbjørnsen and Moe did not publish collected folktales in the raw, but created "retold" versions, seeking to reconstruct the lost Urform of the tales—although the alterations performed were not as drastic as the Grimms sometimes allowed license for themselves. The Norwegian pair also collected tales from the field themselves, in contrast to the Grimms. 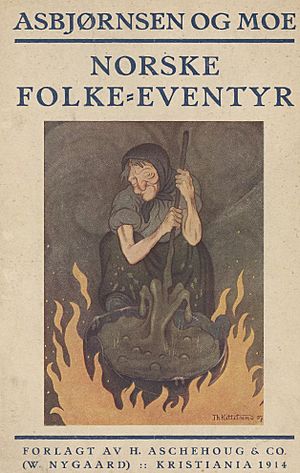 In later editions Werenskiold and Theodor Kittelsen became prominent illustrators. Kittelsen was an unknown artist when he began collaborating on the project on the recommendation of his friend Werenskiold.

Asbjørnsen and Moe evidently approved of Dasent's translations: "In France and England collections have appeared in which our tales have not only been correctly and faultlessly translated, but even rendered with exemplary truth and care nay, with thorough mastery. The English translation, by George Webbe Dasent, is the best and happiest rendering of our tales that has appeared." The latest translation into English is by Tiina Nunnally in 2019.

H. L. Braekstad, Round the Yule Log: Norwegian Folk and Fairy Tales (1881) includes tales from the Norske Huldre-Eventyr. An abridged translation of Stroebe's Nordische Volksmärchen (1922), rendered into English by Martens, provides additional tales from the various collections, and complements the above translations to some extent. Carl Norman's Norwegian Folktales (1960) is a selection that includes some of the tales from the Ny Samling omitted by Dasent.

New Collection. The NF# will be given contiguous from the original collection.

Tales not from any of the proceeding series that are usually included alongside them in later collections:

The Soria Moria castle, which appeared in Dasent's translations of the tales, inspired J. R. R. Tolkien to use the name Moria for a fabulous subterranean complex in his Middle-earth stories.

All content from Kiddle encyclopedia articles (including the article images and facts) can be freely used under Attribution-ShareAlike license, unless stated otherwise. Cite this article:
Norwegian Folktales Facts for Kids. Kiddle Encyclopedia.