Kids Encyclopedia Facts
For other uses, see East of the Sun and West of the Moon (disambiguation).

"East of the Sun and West of the Moon" (Norwegian: Østenfor sol og vestenfor måne) is a Norwegian fairy tale.

"East of the Sun and West of the Moon" was collected by Peter Christen Asbjørnsen and Jørgen Moe. It is Aarne–Thompson type 425A, the search for the lost husband; other tales of this type include "Black Bull of Norroway", "The King of Love", "The Brown Bear of Norway", "The Daughter of the Skies", "The Enchanted Pig", "The Tale of the Hoodie", "Master Semolina", "The Sprig of Rosemary", "The Enchanted Snake", and "White-Bear-King-Valemon". The Swedish version is called "Prince Hat under the Ground". It is related to both the tale of "Cupid and Psyche" in The Golden Ass and to "Beauty and the Beast".

It was included by Andrew Lang in The Blue Fairy Book (1890).

The White Bear approaches a poor peasant and asks if he will give him his prettiest and youngest daughter; in return, the bear will make the man rich. The girl is reluctant, so the peasant asks the bear to return, and in the meantime, persuades her. The White Bear takes her off to a rich and enchanted castle. At night, he takes off his bear form in order to come to her bed as a man, although the lack of light means that she never sees him. 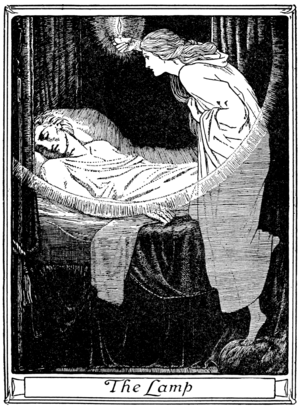 The princess holds up the lamp to take a glimpse at the mysterious prince. Illustration by John Batten for Joseph Jacobs's Europa's Fairy Book (1916).

When she grows homesick, the bear agrees that she might go home as long as she agrees that she will never speak with her mother alone, but only when other people are about. At home, they welcome her, and her mother makes persistent attempts to speak with her alone, finally succeeding and persuading her to tell the whole tale. Hearing it, her mother insists that the White Bear must really be a troll, gives her some candles, and tells her to light them at night, to see what is sharing her bed.

The youngest daughter obeys, and finds he is a highly attractive prince, but she spills three drops of the melted tallow on him, waking him. He tells her that if she held out a year, he would have been free, but now he must go to his wicked stepmother, who enchanted him into this shape and lives in a castle east of the Sun and west of the Moon, and marry her hideous daughter, a troll princess.

The East Wind has never been to the castle east of the Sun and west of the Moon, but his brother the West Wind might have, being stronger. He takes her to the West Wind. The West Wind does the same, bringing her to the South Wind; the South Wind does the same, bringing her to the North Wind. The North Wind reports that he once blew an aspen leaf there, and was exhausted after, but he will take her if she really wants to go. The youngest daughter does wish to go, and so he takes her there.

The prince tells her how she can save him: He will declare that he will marry anyone who can wash the tallow drops from his shirt since trolls, such as his stepmother and her daughter, the troll princess, cannot do it. So instead, he will call in the youngest daughter, and she will be able to do it, so she will marry him. The plan works, and the trolls, in a rage, burst. The prince and his bride free the prisoners captive in the castle, take the gold and silver within, and leave the castle east of the Sun and west of the Moon.

Retellings and translations into English

All content from Kiddle encyclopedia articles (including the article images and facts) can be freely used under Attribution-ShareAlike license, unless stated otherwise. Cite this article:
East of the Sun and West of the Moon Facts for Kids. Kiddle Encyclopedia.