The Frog Prince facts for kids 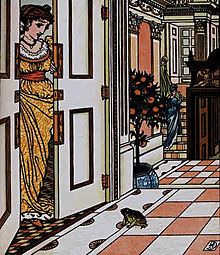 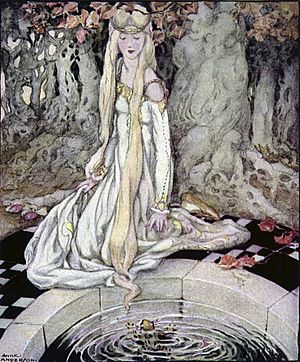 The Frog Prince by Anne Anderson

"The Frog Prince; or, Iron Henry" (German: Der Froschkönig oder der eiserne Heinrich, literally "The Frog King or the Iron Henry") is a German fairy tale collected by the Brothers Grimm and published in 1812 in Grimm's Fairy Tales (KHM 1). Traditionally, it is the first story in their folktale collection. The tale is classified as Aarne-Thompson type 440.

The story is best known through the rendition of the Brothers Grimms, who published it in their 1812 edition of Kinder- und Hausmärchen (Grimm's Fairy Tales), as tale no. 1. An older, moralistic, version was included in the Grimms' handwritten Ölenberg Manuscript from 1810. Jack Zipes noted in 2016 that the Grimms greatly treasured this tale, considering it to be one of the "oldest and most beautiful in German-speaking regions."

The Grimms' source is unclear, but it apparently comes an oral tradition of Dortchen Wild's family in Kassel. The volume 2 of the first edition of Kinder- und Hausmärchen, published in 1815, included a variation of this story entitled Der Froschprinz (The Frog Prince), published as tale no. 13. As this version was not included in later editions, it has since remained relatively unknown.

It has been postulated by some scholars that parts of the tale may extend back until at least Roman times; an aspect of the story is referred to in Petronius' Satyricon, in which the character Trimalchio remarks, "qui fuit rana nunc est rex" ("The man who was once a frog is now a king"). Other scholars, however, argue that this may actually be a jab at the emperor Nero, who was often mockingly compared to a frog.

Folkorist Stith Thompson suggested that the story of the Frog King in the German tradition began with a 13th-century literary tale written in Latin.

In the tale, a spoiled princess reluctantly befriends the Frog Prince, whom she met after dropping a golden ball into a pond, and he retrieves it for her in exchange for her friendship. The Frog Prince, who is under a witch's curse, magically transforms back into a handsome prince. In the original Grimm version of the story, the frog's spell was broken when the princess threw it against the wall, while in modern versions the transformation is triggered by the princess kissing the frog.

In other early versions, it was sufficient for the frog to spend the night on the princess' pillow.

The frog prince also has a loyal servant named Henry (or Harry) who had three iron bands affixed around his heart to prevent it from breaking in his sadness over his master's curse. When the frog prince reverts to his human form, Henry's overwhelming happiness causes all three bands to break, freeing his heart from its bonds.

It is Aarne–Thompson type 440. Other folktales similar to the Frog Prince are:

A similar tale type is ATU 402, "The Animal Bride". In these tales, a female animal (mouse, cat or frog) helps a prince with three tasks and after marrying him, gain assumes human form. In Puddocky (old word for toad), another German folk tale, and likewise "Tsarevna Lyagushka" (The Frog Princess), a Russian folk tale, the male and female roles of the frog prince are reversed. Prince Ivan Tsarevitch discovers the enchanted female frog, who becomes Vasilisa the Wise, a sorceress.

A possible parallel in Antiquity may be found in the story of Amymone, who was one of the Danaides. She went to fetch water in a jug because of a drought season caused by the gods. A satyr tried to force himself on her, but the god Poseidon rescued her. It has been suggested that the amphibian suitor and the handsome prince may have been separate characters at first.

In a Latvian tale, Little White Dog, a girl is tasked with getting water from a well without getting the bucket wet. A little white dog appears and promises to help her if she accepts him as her bridegroom.

All content from Kiddle encyclopedia articles (including the article images and facts) can be freely used under Attribution-ShareAlike license, unless stated otherwise. Cite this article:
The Frog Prince Facts for Kids. Kiddle Encyclopedia.