The Well of the World's End facts for kids

Kids Encyclopedia Facts
Not to be confused with The Well at the World's End.

The Well of the World's End is an Anglo-Scottish Border fairy tale, recorded in the Scottish Lowlands, collected by Joseph Jacobs in English Fairy Tales. His source was The Complaynt of Scotland, and he notes the tale's similarity to the German Frog Prince. Like that tale, it is Aarne-Thompson type 440, "The Frog King" or "Iron Henry". 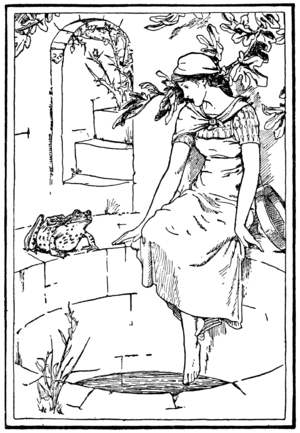 A girl's mother died, and her father remarried. Her stepmother abused her, made her do all the housework, and finally decided to be rid of her. She gave her a sieve and ordered her to not come back without filling it at the Well of the World's End. The girl set out and questioned everyone about the way. Finally, a little old woman directed her to the well, but she could not fill the sieve. She wept. A frog asked what was wrong and said it could aid her if she promised to do everything he asked for a night. She agreed, and the frog told her to stop the holes up with moss and clay. With that, she carried back the water.

The stepmother was angry at her return, and when the frog arrived, she insisted that the girl keep her promise. The frog made her take it on her knee, give it some supper, and take it to bed with her. In the morning, it made her chop off its head. When she did, it was transformed into a handsome prince. The stepmother was even more angry, but the prince married the girl and took her home.

All content from Kiddle encyclopedia articles (including the article images and facts) can be freely used under Attribution-ShareAlike license, unless stated otherwise. Cite this article:
The Well of the World's End Facts for Kids. Kiddle Encyclopedia.