Casimir I the Restorer facts for kids 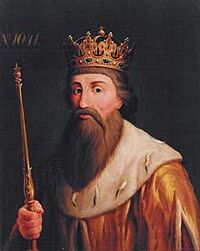 Casimir I the Restorer (Polish: Kazimierz I Odnowiciel; b. Kraków, 25 July 1016 - d. Poznań, 28 November 1058), was a Duke of Poland. He was a part of the Piast dynasty and father of Boleslaw II. He is known as "the Restorer" because he reunited the Polish Kingdom.

All content from Kiddle encyclopedia articles (including the article images and facts) can be freely used under Attribution-ShareAlike license, unless stated otherwise. Cite this article:
Casimir I the Restorer Facts for Kids. Kiddle Encyclopedia.