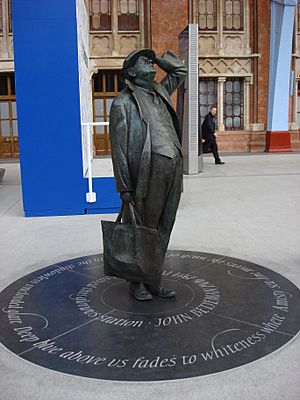 Lycett was born in Dublin. She was the daughter of John Betjeman. She was raised in Berkshire. She married Rupert Lycett Green in 1963.

She wrote sixteen books including English Cottages, Goodbye London, The Perfect English House, Over the Hills and Far Away and The Dangerous Edge of Things.

Her television documentaries include “The Englishwoman and the Horse” and “The Front Garden”. Unwrecked England, based on a regular column of the same name she has written for The Oldie since 1992, was published in 2009.

All content from Kiddle encyclopedia articles (including the article images and facts) can be freely used under Attribution-ShareAlike license, unless stated otherwise. Cite this article:
Candida Lycett Green Facts for Kids. Kiddle Encyclopedia.