Kenneth Robert Livingstone (born 17 June 1945) is a British socialist politician. He has twice held the leading political role in London local government: firstly as leader of the Greater London Council from 1981 until the council was abolished in 1986 by the government of Margaret Thatcher, and secondly as the first Mayor of London, a post he held from its creation in 2000 until 2008. He also served as Labour Party Member of Parliament for Brent East between 1987 and 2001.

Livingstone was born in Lambeth, London, England, the son of Ethel Ada (Kennard) and Robert Moffat Livingstone who worked as a ship's master in the Merchant Navy. Livingstone has described his parents as "working class Tories".

Livingstone attended Tulse Hill Comprehensive School. He worked for eight years as a cancer research technician, between 1962 and 1970. He also trained as a teacher, qualifying in 1973, but was never active in the profession.

Livingstone joined the Labour Party in 1968 at a time when party membership was falling and few new young members were joining, and rose rapidly in the local party. He was elected to the Lambeth Borough Council in May 1971 and served as Vice-Chair of the Housing Committee from 1971 to 1973.

Livingstone and his current partner Emma Beal, have a son and a daughter. He also has three other children from previous relationships.

He is known for his enthusiasm for keeping and breeding newts. 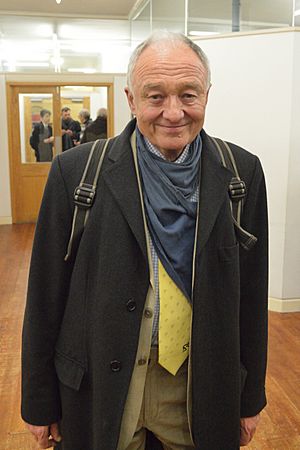 Livingstone after a Radio 4 programme 2016

On 28 August 2008, it was announced that Livingstone will be an adviser on urban planning to Caracas, Venezuela. He will act as a consultant on the capital's policing, transport and other municipal issues.

Livingstone stood for the Labour candidacy as 2012 Mayoral candidate. On 4 May 2012 Livingstone was defeated in the London 2012 Mayoral Elections by the incumbent Mayor, Boris Johnson.

Livingstone was suspended from the Labour Party in April 2016 after he was accused of "bringing the party into disrepute" following a BBC Radio London interview.

All content from Kiddle encyclopedia articles (including the article images and facts) can be freely used under Attribution-ShareAlike license, unless stated otherwise. Cite this article:
Ken Livingstone Facts for Kids. Kiddle Encyclopedia.