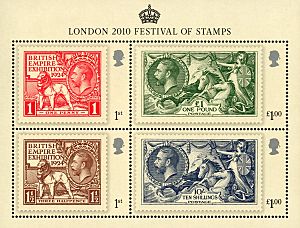 The British miniature sheet for the London 2010 Festival of Stamps.

A miniature sheet or souvenir sheet is a small group of postage stamps still attached to the sheet on which they were printed. They may be either regular issues that just happen to be printed in small groups, or special issues often commemorating some event, such as a national anniversary, philatelic exhibition, or government program. The number of stamps ranges from one to about 25; larger sheets of stamps are simply called "sheets" with no qualifier.

The stamps on the sheet may be perforated in the usual way, or imperforate. The margins or selvage of the sheet may have additional printing, ranging from a simple statement of the occasion being commemorated, up to a full picture of which the stamp(s) are just a small part.

All content from Kiddle encyclopedia articles (including the article images and facts) can be freely used under Attribution-ShareAlike license, unless stated otherwise. Cite this article:
Miniature sheet Facts for Kids. Kiddle Encyclopedia.