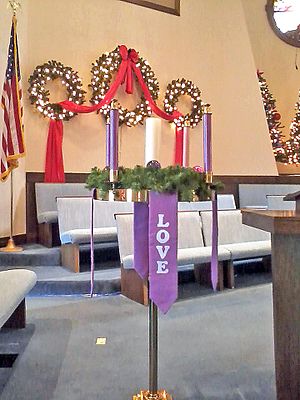 On Christmas Day, the Christ Candle in the center of the Advent wreath is traditionally lit in many church services. 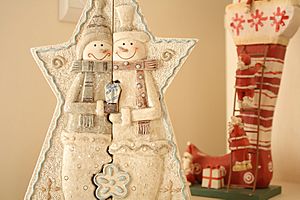 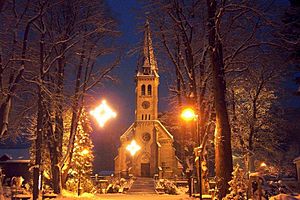 A Christmas decoration is any of several types of ornamentation used at Christmas time. The traditional colours of Christmas are pine green (evergreen), snow white, and heart red. Blue and white are often used to represent winter, or sometimes Hanukkah, which occurs around the same time. Gold and silver are also very common, as are just about any other metallic colours. Typical images on Christmas decorations include Baby Jesus, Father Christmas, Santa Claus, and the star of Bethlehem. Typical winter icons include snowflakes, snowmen, icicles, and even penguins and polar bears.

Christmas trees may be decorated with lights and ornaments.

The interior of a home may be decorated with these plants, along with garlands and evergreen foliage. These often come with small ornaments tied to the delicate branches, and sometimes with a small light set.

Wreaths are made from real or artificial conifer branches, or sometimes other broadleaf evergreens or holly. Several types of evergreen or even deciduous branches may be used in the same wreath, along with pinecones and sprays of berries, and Christmas ornaments. A bow is usually used at the top or bottom, and an electric or unlit candle may be placed in the middle.

Christmas lights are often used, and they may be hung from door or windows, and sometimes walls, lamp posts and light fixtures. Since the 19th century, the poinsettia, a native plant from Mexico, has been associated with Christmas.

In many countries a representation of the Nativity scene is very popular, and people are encouraged to compete and create the most original or realistic ones. Within some families, the pieces used to make the representation are considered a valuable family heirloom.

One of the most popular items of Christmas decorations are stockings. According to legend, Saint Nicolas would creep in through the chimney and slip gold into stockings hanging by the fireplace. Various forms of stockings are available; from simple velvet ones, to sock-shaped bags to animated ones.

Figural glass Christmas ornaments originated in the small town of Lauscha, Germany in the latter half of the 19th century.

F.W. Woolworth discovered these glass ornaments on a toy and doll buying trip to Sonnenburg, Germany in the 1890s. He sold them in his "five and ten cent" stores in America. The ornaments were said to have contributed to Woolworth's great business success. 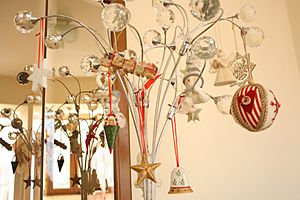 Christmas decorations are typically put up in late November or early December, usually to coincide with the start of Advent. In the UK, Christmas lights on the high street are generally switched on in November. In the U.S., the traditional start of Christmas time is Thanksgiving. Major retailers put their seasonal decorations out for sale after back to school sales, while smaller niche Christmas Stores sell Christmas decorations year round.

In some places Christmas decorations are traditionally taken down on Twelfth Night, the evening of January 5 or January 6.

In the United States, most stores immediately remove decorations the day after Christmas, as if the holiday season were over once the gifts are bought. Nearly all Americans leave their home decorations up and lit until at least New Year's Day, and inside decorations can often be seen in windows for several days afterward.

All content from Kiddle encyclopedia articles (including the article images and facts) can be freely used under Attribution-ShareAlike license, unless stated otherwise. Cite this article:
Christmas decoration Facts for Kids. Kiddle Encyclopedia.