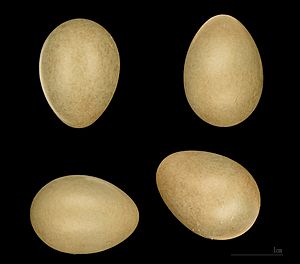 The nightingale (Luscinia megarhynchos) is a small bird. It is also known as the rufous or common nightingale. It used to be classed as a member of the thrush family Turdidae. It belongs to a group of more terrestrial species, often called chats.

It is a migratory insectivorous species. It breeds in forests and scrubs in Europe and south-west Asia. The distribution is more southerly than the very closely related thrush nightingale Luscinia luscinia. It nests on the ground within or next to dense bushes. It passes the winter southern Africa. Studies have shown that nightingales seem to choose places to breed that meet certain criteria (Wink 1973):

The Nightingale is slightly larger than the robin, at 15-16.5 cm length. It is plain brown above except for the reddish tail. It is buff to white below. Sexes are similar.

Nightingales are named so because they frequently sing at night as well as during the day. The name has been used for well over 1,000 years, being highly recognizable even in its Anglo-Saxon form - 'nihtingale'. It means 'night songstress'. Early writers assumed the female sang; in fact, it is the male.

The song is loud, with an impressive range of whistles, trills and gurgles. Its song is particularly noticeable at night because few other birds are singing. This is why its name (in several languages) includes "night". Only unpaired males sing regularly at night, and nocturnal song is likely to serve attracting a mate. Singing at dawn, during the hour before sunrise, is assumed to be important in defending the bird's territory. Nightingales sing even more loudly in urban or near-urban environments, in order to overcome the background noise. The most characteristic feature of the song is a loud whistling crescendo, absent from the song of thrush nightingale. It has a frog-like alarm call.

All content from Kiddle encyclopedia articles (including the article images and facts) can be freely used under Attribution-ShareAlike license, unless stated otherwise. Cite this article:
Nightingale Facts for Kids. Kiddle Encyclopedia.