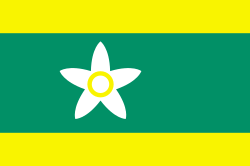 Ehime Prefecture (愛媛県, Ehime-ken) is a prefecture in the Shikoku region of Japan on the island of Shikoku. The capital city is Matsuyama.

Until the Meiji Restoration, Ehime prefecture was known as Iyo Province. The name Ehime comes from the Kojiki. It means "beautiful maiden."

After the Battle of Sekigahara, the Tokugawa shogun gave the area to his allies. Kato Yoshiaki built Matsuyama Castle which became the center of the modern city of Matsuyama.

Drought is common in Ehime history.

National Parks are established in about 7% of the total land area of the prefecture.

Ōyamazumi jinja is the chief Shinto shrine (ichinomiya) in the prefecture.

All content from Kiddle encyclopedia articles (including the article images and facts) can be freely used under Attribution-ShareAlike license, unless stated otherwise. Cite this article:
Ehime Prefecture Facts for Kids. Kiddle Encyclopedia.