Apollo Beach is an unincorporated census-designated place in Hillsborough County, Florida, United States. The population was 14,055 at the 2010 census, up from 7,444 at the 2000 census.

As of the 2010 census, there were 14,701 people in Apollo Beach and 5,886 households, an increase of nearly 75% in both categories over the 2000 census. New families came in with new construction, with the population of aged five years and under increasing by over 150%. The racial makeup of the community was 87% White, 6% African American, 0% Native American, 2% Asian, 3% from other races, and 2% from two or more races. Hispanic or Latino of any race were 14% of the population.

There were 5,886 households, of which 27% had children under the age of 18 living with them, and 63% were married couples living together, both higher than the state average.

The history of Apollo Beach started in 1923 on land owned by the Dickman family, then used annually for farming and grazing pasture. Much of the land was mangrove and low-elevation and was considered uninhabitable.

In the 1930s, Paul Dickman conceived the idea of a waterfront community. He felt the location was ideally located equidistant between Tampa and Bradenton along U.S. Route 41.

The Dickmans secured the services of an engineering firm in Miami, "Radar Engineering", to design a subdivision including roads, canals, schools, recreation areas, and community services.

In the early 1950s, Dickman negotiated the sale of the land to three men from New York: Turner, Dean and Clark. They named the land "Tampa Beach", believing the association with Tampa would attract interested persons more readily than a name which did not properly locate the area geographically.

Construction began on the Flamingo Canal near U.S. 41, and proceeded toward Fairway Boulevard. It was their intention to extend the canal to Tampa Bay so as to achieve access to open water. The task became too large for the amount of capital they had invested and for the abilities of the persons involved and in 1956 they notified Dickman they could not go through with the project.

In 1957, Francis Corr, a retired businessman from Michigan, purchased the land. Corr renamed the area La Vida Beach. Legend has it that in 1958 Corr's wife Dorothy suggested a new name, Apollo Beach, for the area's greatest benefit — sunshine. Locals say the name was also inspired by the U.S. space program that was then developing in Florida. Mr. Corr started construction of 50 homes in the area between U.S. 41 and Golf & Sea Boulevard.

In early 1958, Corr reached an agreement with Robert E. Lee, a South Carolina contractor, to join in the development. Lee was to continue the dredging of canals and in exchange, was to receive parcels of land.

In the early 1960s, Francis Corr sold his company and the Apollo Beach land to a Miami company known as Flora Sun Corporation. Flora Sun sold some of the land on the northern end to Tampa Electric Company for a power plant site on the land's northern border, which is now the Big Bend power plant. Flora Sun failed in its obligations in the purchase of the land from the Corr family and about seven years later the family got the land back out of bankruptcy court.

In the mid-1960s, Corr's son, Thomas, moved his young family to the area to continue work on the Apollo Beach project; however, while the land was in bankruptcy proceedings from Flora Sun, the dredge and fill permits required to construct the canal system expired.

The Corr family continued to struggle with the development over the years, facing regulatory hurdles and tightening growth policy in Florida with the passage of the growth management act in 1972 and expanded policies in 1984.

Thomas Corr continued to develop the community and donated land for parks and schools and preserving hundreds of acres of mangrove swamps and environmental areas. He started a community bank, a chamber of commerce, civic clubs and festivals. Thomas Corr died in 1998. In 2006, Hillsborough County honored the work of Thomas Corr by naming the new elementary school on Big Bend Road the Thomas P. Corr Elementary School.

Today Apollo Beach is a thriving waterfront community with year-round boating, fishing, and other water activities. The estimated 55 miles of canals lead to Tampa Bay and the Gulf of Mexico via underpass of the Sunshine Skyway bridge.

The climate in this area is characterized by hot, humid summers and generally mild to cool winters. According to the Köppen Climate Classification system, Apollo Beach has a humid subtropical climate, abbreviated "Cfa" on climate maps.

The schools that serve Apollo Beach are: 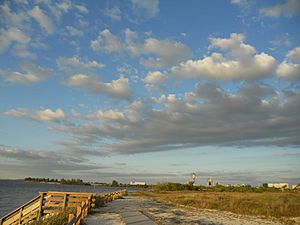 All content from Kiddle encyclopedia articles (including the article images and facts) can be freely used under Attribution-ShareAlike license, unless stated otherwise. Cite this article:
Apollo Beach, Florida Facts for Kids. Kiddle Encyclopedia.