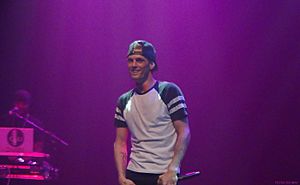 Aaron Charles Carter (born December 7, 1987) is an American pop singer.He was born in Tampa, Florida. He became famous in the late 1990s.

Carter started his music career when he was seven years old as the singer of Dead End. He left the band after two years.

Carter performed for the first time on his own in Berlin in March 1997 as the opening act for Backstreet Boys. He was 9 years old. After this he was signed to Edel America. His first album Aaron Carter was released in December 1997 in Europe. It was released in the United States on June 16, 1998.

All content from Kiddle encyclopedia articles (including the article images and facts) can be freely used under Attribution-ShareAlike license, unless stated otherwise. Cite this article:
Aaron Carter Facts for Kids. Kiddle Encyclopedia.