Burning of Parliament facts for kids 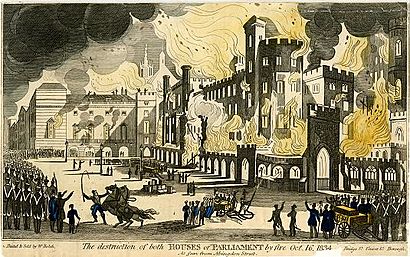 The Palace of Westminster on fire, October 1834

The Burning of Parliament was a great fire in London on 16 October 1834. The Palace of Westminster, the medieval royal palace used as the home of the British parliament, was largely destroyed. The blaze was caused by the burning of small wooden tally sticks. They had been used as part of the accounting procedures of the Exchequer until 1826. The sticks were disposed of in a careless manner. They were thrown in the two furnaces under the House of Lords, which caused a chimney fire in the two flues that ran under the floor of the Lords' chamber. The fire smoldered under the floor for most of the day. The senile housekeeper and a careless Clerk of Works ignored all the warning signs of the pending disaster. This led the Prime Minister to call it "one of the greatest instances of stupidity upon record".

The fire spread rapidly throughout the buildings. It became the worst fire to occur in London between the Great Fire of 1666 and the Blitz of the Second World War. the event attracted large crowds which included several artists who provided pictorial records of the event. The fire lasted for most of the night. The House of Lords and the House of Commons were destroyed along with most of their libraries, art collections and records.

All content from Kiddle encyclopedia articles (including the article images and facts) can be freely used under Attribution-ShareAlike license, unless stated otherwise. Cite this article:
Burning of Parliament Facts for Kids. Kiddle Encyclopedia.