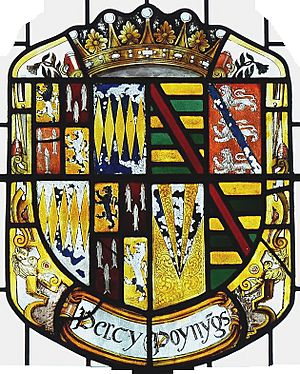 16th century stained glass in the Percy Window at Petworth House Chapel, depicting arms of Henry Percy, 3rd Earl of Northumberland (1421-1461) impaling the arms of the Poynings, his wife's family 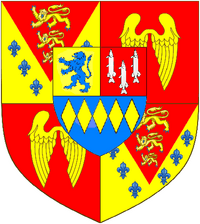 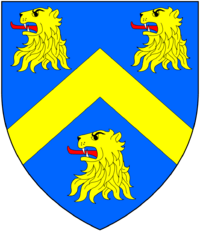 Arms of Wyndham, Earl of Egremont: Azure, a chevron between three lion's heads erased or (arms of Wyndham of Orchard Wyndham and Felbrigg 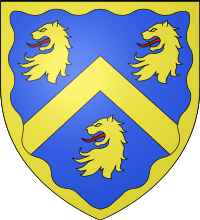 Petworth House in the parish of Petworth, West Sussex, England, is a late 17th-century Grade I listed country house, rebuilt in 1688 by Charles Seymour, 6th Duke of Somerset, and altered in the 1870s to the design of the architect Anthony Salvin. It contains intricate wood-carvings by Grinling Gibbons (d.1721). It is the manor house of the manor of Petworth. For centuries it was the southern home for the Percy family, Earls of Northumberland. Petworth is famous for its extensive art collection made by George Wyndham, 3rd Earl of Egremont (1751-1837), containing many works by his friend J. M. W. Turner. It also has an expansive deer park, landscaped by Capability Brown, which contains the largest herd of fallow deer in England.

The manor of Petworth first came into the possession of the Percy family as a royal gift from Adeliza of Louvain, the widow of King Henry I (1100-1135), to her brother Joscelin of Louvain. He later married the Percy heiress and adopted the surname Percy. His descendants became the Earls of Northumberland, the most powerful family in northern England.

The Percy family, whose primary seat was at Alnwick Castle in Northumberland, bordering Scotland, intended Petworth to be for their occasional residence only. However, in the late 16th century, Queen Elizabeth I grew suspicious of the Percy family's allegiance to Mary, Queen of Scots, and confined them to Petworth.

In 1670 Josceline Percy, 11th Earl of Northumberland (1644-1670) died without a male heir, and thus his considerable fortune and estates of Petworth House, Alnwick Castle, Syon House and Northumberland House were inherited by his 2-year-old daughter and sole-heiress, Lady Elizabeth Percy (1667-1722). In 1682, at the age of 16 and already twice widowed, she married the 20 year old Charles Seymour, 6th Duke of Somerset (1662-1748), whose family seat was Marlborough Castle in Wiltshire. They became one of the wealthiest couples in England.

The site was previously occupied by a fortified manor house built by Henry de Percy, 1st Baron Percy (1273–1314), the 13th-century chapel and undercroft of which still survive. Since 1750 the house and estate have been owned by the prominent Wyndham family, descended from Sir Charles Wyndham, 4th Baronet (1710-1763) of Orchard Wyndham in Somerset, a nephew and co-heir of Algernon Seymour, 7th Duke of Somerset (1684-1750). As part of the inheritance and splitting-up of the great Percy inheritance, which had been a source of contention between the 7th Duke and his father the 6th Duke, in 1749 after the death of the 6th Duke, King George II granted the 7th Duke four extra titles in the peerage, including Baron Cockermouth and Earl of Egremont, which latter two were created with special remainder to Sir Charles Wyndham, the intended and actual recipient of Petworth, Cockermouth Castle and Egremont Castle. The 7th Duke's only daughter Lady Elizabeth Seymour and her husband Sir Hugh Smithson, 4th Baronet (d.1786), received the other Percy estates, including Alnwick Castle and Syon House, together with the titles Baron Warkworth of Warkworth Castle and Earl of Northumberland, created also in 1749 with special remainder to Smithson.

The 6th Duke had "conceived a violent dislike for Smithson", the husband of his granddaughter, and wrote to her stating "You are descended by many generations from the most ancient families in England and it is you who doth add ancient blood to Sir Hugh Smithson’s family. He adds not so ancient blood to your family". He was determined to prevent Smithson from inheriting any of the Percy lands and wished to make as his sole heir his grandson Sir Charles Wyndham, whose ancient family originated at Felbrigg Hall in Norfolk and had married into the nobility, for example his ancestor Sir John Wyndham (d.1503) had married Lady Margaret Howard, 4th daughter of John Howard, 1st Duke of Norfolk, KG, Earl Marshal (c.1425-1485). As part of his plan he petitioned the king to grant him the additional title of Earl of Northumberland, with special remainder to Wyndham. The plan was opposed by his son the future 7th Duke, who petitioned the king against, and succeeded at least in delaying the drawing up of the necessary letters patent. The 6th Duke died in 1748 before the letters patent were drawn up and the 7th Duke put into effect a similar scheme, which split the Percy inheritance between his own son-in-law Smithson and his late father's choice of heir, Sir Charles Wyndham.

In accordance with the wishes of his father-in-law the 7th Duke, in 1750 Smithson changed his surname by Act of Parliament to Percy, adopted the Percy arms, and in 1766 was created Duke of Northumberland and Earl Percy. It had been a stipulation before the marriage in 1682 of the 6th Duke to Elizabeth Percy that he and his descendants should adopt the surname Percy, but this was not binding on the couple who were minors, and in 1687 the Duchess having reached the age of 21, dispensed with the agreement. In 2015 Smithson's descendant Ralph Percy, 12th Duke of Northumberland (born 1956) still owns the said Percy estates.

The Wyndham Earls of Egremont soon died out in the male line but before that event George Wyndham, 3rd Earl of Egremont (1751-1837) bequeathed Petworth and Cockermouth Castle to his illegitimate son and adopted heir Col. George Wyndham (1787-1869), created in 1859 by Queen Victoria Baron Leconfield, who adopted a differenced version of the Wyndham armorials. The 3rd Earl's heir male was his nephew George Wyndham, 4th Earl of Egremont (1786-1845), the last Earl, who under law inherited the earldom, but had been stripped of the Percy inheritance of Petworth, receiving instead the (not inconsiderable) entailed Wyndham estates including Orchard Wyndham, still owned today by the Wyndham family. He attempted to make up for the loss of Petworth by building his own stately home in Devon called Silverton Park, which was widely deemed hideous and was demolished in 1901. The future 6th Baron Leconfield was in 1963 created Baron Egremont, in a sense a regaining of the name of the Earldom denied to his great-grandfather Col. George Wyndham (1787-1869) due to his illegitimacy.

The house and deer park were handed over to the nation in 1947 by Edward Wyndham, 5th Baron Leconfield (1883-1967) and are now managed by the National Trust under the name Petworth House & Park.

The Leconfield Estates continue to own much of Petworth and the surrounding area. The contents of the house, in particular the paintings and sculptures, are now the property of the National Trust having been taken in lieu of accumulated death duties.

Lord Egremont and his family live in the south wing, allowing much of the remainder to be open to the public. Lady Egremont has restored the gardens.

Today's building houses an important collection of paintings and sculptures, including 19 oil paintings by J. M. W. Turner (some owned by the family, some by Tate Britain), who was a regular visitor to Petworth, paintings by Van Dyck, carvings by Grinling Gibbons and Ben Harms, classical and neoclassical sculptures (including ones by John Flaxman and John Edward Carew), and wall and ceiling paintings by Louis Laguerre. There is also a terrestrial globe by Emery Molyneux, believed to be the only one in the world in its original 1592 state. 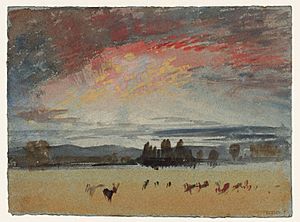 The 283-hectare (700-acre) landscaped park, known as Petworth Park, has the largest herd of fallow deer in England. It is one of the more famous in England, largely on account of a number of pictures of it which were painted by Turner. There is also a 12-hectare (30-acre) woodland garden, known as the Pleasure Ground and some unusual Ha-ha's. The landscaped park and pleasure grounds of Petworth are Grade I listed on the Register of Historic Parks and Gardens.

As was usual for a mediaeval manor house, it was built in its original form next to the parish church (to provide the lord of the manor with enhanced spiritual benefits), around which developed a village, now grown to a sizeable town. Such position is unusual for a country mansion of its size and date, which were frequently later re-built on new more private sites away from the original manor house, or the church and village were on occasion demolished to provide the desired privacy. Petworth House and Park are thus today situated immediately adjacent to the town of Petworth, with its shops and restaurants.

As an insight into the lives of past estate workers the Petworth Cottage Museum has been established in High Street, Petworth, furnished as it would have been in about 1910.

Art on display at Petworth House

All content from Kiddle encyclopedia articles (including the article images and facts) can be freely used under Attribution-ShareAlike license, unless stated otherwise. Cite this article:
Petworth House Facts for Kids. Kiddle Encyclopedia.