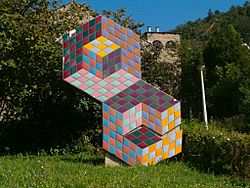 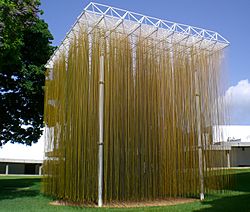 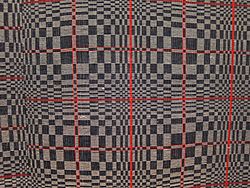 Binakol: a type of ceremonial blanket from the Phillipines which features optical effects

Op art is a style of painting which makes use of optical illusions and other kinds of unusual optical effects. Victor Vasarely a Hungarian artist, was perhaps the first to use this theme regularly, in the 1930s. In the 1960s, Bridget Riley became one of the world's best-known op artists. She specialised in the effects produced by closely fitted lines. Jesús Rafael Soto used mobile elements, so connecting op art with kinetic (moving) structures.

The idea of visual illusions and effects fascinated other artists and intellectuals. The famous Dutch artist M.C. Escher drew impossible structures which worked by using visual illusions. The art historian Ernst Gombrich wrote a detailed study on visual effects in art. The psychologist Richard Gregory spent much of his career studying why the mind saw illusions.

All content from Kiddle encyclopedia articles (including the article images and facts) can be freely used under Attribution-ShareAlike license, unless stated otherwise. Cite this article:
Op art Facts for Kids. Kiddle Encyclopedia.