1251 Avenue of the Americas facts for kids

1251 Avenue of the Americas, formerly known as the Exxon Building, is a skyscraper on Sixth Avenue (also known as Avenue of the Americas), between 49th and 50th Streets, in Manhattan, New York City. It is owned by Mitsui Fudosan. The structure is built in the international style and looks like a simple cuboid devoid of any ornamentation. The vertical façade consists of alternating narrow glass and limestone stripes. The glass stripes are created by windows and opaque spandrels, forming continuous areas that are washed by machines sliding down the façade. A seven-floor base wraps around the western portion of the building, and there is a sunken plaza with a large two-tier pool and fountains facing Sixth Avenue. In the plaza stands the bronze statue named Out to Lunch by John Seward Johnson II—of the same series as the one standing outside 270 Park Avenue.

Despite being one of the 100 tallest buildings in the United States, 1251 Avenue of the Americas is almost impossible to see from more than just a few blocks away as it is flanked on all sides by buildings over 500 feet tall. The result is that even though 1251 Avenue of the Americas is approximately as tall as the tallest buildings in cities such as Boston or Minneapolis, it has almost no presence on the New York City skyline.

In 1989, Exxon announced that it was moving its headquarters and around 300 employees from New York City to the Las Colinas area of Irving, Texas. Exxon sold the Exxon Building, its former headquarters, to a unit of Mitsui Real Estate Development Co. Ltd. in 1986 for $610 million. John Walsh, president of Exxon subsidiary Friendswood Development Company, stated that Exxon left New York because the costs were too high. Its New York offices moved to Brooklyn; it no longer retains a presence in Rockefeller Center.

In May 2013, the structure received silver certification under the U.S. Green Building Council’s LEED for Existing Buildings Rating System. 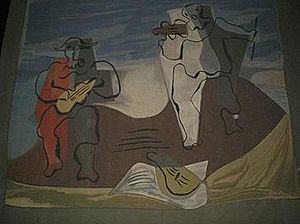 Artist-authorized replica of Pablo Picasso's tapestry for the ballet Mercure

Inside, on the western end of 1251's atrium hangs an artist-authorized replica of a tapestry Pablo Picasso created for the ballet Mercure, the original of which hangs in the Musée National d'Art Moderne in Paris, France. It was created specifically for the building, as per the plaque beneath it.

All content from Kiddle encyclopedia articles (including the article images and facts) can be freely used under Attribution-ShareAlike license, unless stated otherwise. Cite this article:
1251 Avenue of the Americas Facts for Kids. Kiddle Encyclopedia.