1211 Avenue of the Americas facts for kids

1211 Avenue of the Americas (also known as the News Corp. Building) is an International style skyscraper on Sixth Avenue in Midtown Manhattan, New York City. Formerly called the Celanese Building, it was completed in 1973 as part of the later Rockefeller Center expansion (1960s–1970s) dubbed the "XYZ Buildings". The Celanese Corporation would later move to Dallas, Texas. Currently, 1211 is owned by Ivanhoé Cambridge. The structure has a simple slab-like shape devoid of any decoration, its prosaic façade consisting of vertical alternating limestone and glass stripes. The façade stone piers are supernumerary; there are twice as many of them as structurally necessary. The glass bands are continuous and offer no indication of floor levels. These features ably create the visual lack of scale, so the tower does not look overly bulky.

The building was part of the later Rockefeller Center expansion (1960s–1970s) dubbed the "XYZ Buildings". Their plans were first drawn in 1963 by the Rockefeller family's architect, Wallace Harrison, of the architectural firm Harrison & Abramovitz. Their letters correspond to their height. 1251 Avenue of the Americas is the "X" Building as it is the tallest at 750 ft (229 m) and 54 stories, and was the first completed, in 1971. The "Y" is 1221 Avenue of the Americas, which was the second tower completed (1973) and is the second in height (674 ft and 51 stories). The "Z" Building, the shortest and the youngest, is 1211 Avenue of the Americas with 45 stories (592 ft).

The structure is LEED certified (silver level designation) by USGBC. 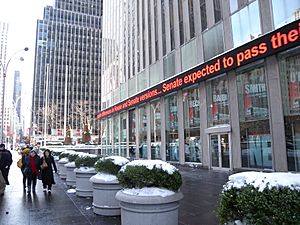 The building served as the global headquarters for the original News Corporation, founded by Australian-born businessman Rupert Murdoch in 1980. It continues to serve as the headquarters for subsequent spin-offs Fox Corporation (2019–present) and the present-day News Corp (2013–present), and until 2019, 21st Century Fox (2013–2019). The building is well-known for housing the main Fox News studios, part of the Fox News Group which is currently owned by Fox Corp. Well-known News Corp divisions housed within the building include Dow Jones & Company, The Wall Street Journal, and the New York Post.

Other companies unaffiliated with News Corp that lease office space in the building include Annaly Capital Management and Ropes & Gray LLP.

All content from Kiddle encyclopedia articles (including the article images and facts) can be freely used under Attribution-ShareAlike license, unless stated otherwise. Cite this article:
1211 Avenue of the Americas Facts for Kids. Kiddle Encyclopedia.