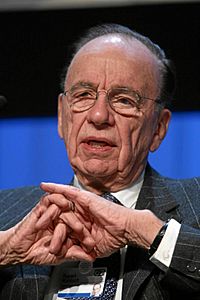 The News Corporation (or 'News Corp.') was an Australian, and later American, mass media corporation. It was based in New York City, New York. It was the world's second biggest media company in revenue in 2011, and the world's third largest company in entertainment in 2009.

News Corporation was founded in Adelaide in 1979, by Rupert Murdoch. It was incorporated under South Australian commercial law until 2004 when the company moved to the United States. It was re-incorporated under Delaware law after its shareholders approved the move on 12 November 2004. It was a publicly traded company listed on the NASDAQ. Murdoch remained the chairman and chief executive officer of the company until its end in 2013.

Among its major holdings were News Limited, News International (whose properties include The Times, The Sun, and the now-closed News of the World), Dow Jones & Company (which owned The Wall Street Journal), the book publisher HarperCollins, and the Fox Entertainment Group (owners of the 20th Century Fox film studio and the Fox Broadcasting Company).

News Corporation was split into two different companies on 28 June 2013. Both are publicly traded companies: 21st Century Fox consists mainly of television and media assets, while a new News Corp focuses on publishing.

The following companies are subsidiaries of News Corporation that either are no longer active or have been absorbed into another part of the company.

All content from Kiddle encyclopedia articles (including the article images and facts) can be freely used under Attribution-ShareAlike license, unless stated otherwise. Cite this article:
News Corporation Facts for Kids. Kiddle Encyclopedia.