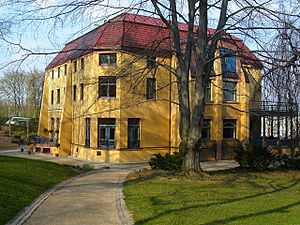 Henry Clemens Van de Velde (3 April 1863, Antwerp – 15 October 1957, Zürich) was a Belgian painter, architect and interior designer. Together with Victor Horta and Paul Hankar he is one of the main founders of Art Nouveau in Belgium. Van de Velde spent the most important part of his career in Germany.

Van de Velde studied painting in Antwerp, under Charles Verlat and in Paris under Carolus-Duran. As a young painter he was influenced by Paul Signac and Georges Seurat. He used a neo-impressionist style. In 1889 he became a member of the Brussels-based artist group "Les XX". During this period he made a lasting friendship with the painter Théo van Rysselberghe and the sculptor Constantin Meunier.

In 1892 he stopped painting. Instead he worked on the arts of decoration and interior design. His own house, Bloemenwerf in Ukkel, was his first try at architecture. He also made interiors and furniture for the art gallery "L'Art Nouveau" of Samuel Bing in Paris in 1895. This gave the movement its first name as Art Nouveau.

Around the turn of the century, he designed Villa Leuring in the Netherlands, and Villa Esche in Chemnitz, two works that show his Art Nouveau style in architecture. He also designed the interior of the Folkwang Museum in Hagen. In 1905 he was asked by the Grand Duke of Weimar to make the Grand-Ducal School of Arts and Crafts in Weimar.

Although a Belgian, Van de Velde would play an important role in the German Werkbund. This group was made to help improve and promote German design by making close relations between industry and designers. He went against Hermann Muthesius at the Werkbund meeting of 1914. Their debate marked the history of Modern Architecture. Van de Velde wanted individuality of artists while Hermann Muthesius wanted standardization.

During World War I, Van de Velde, as a foreign national, was made to leave Weimar. During this period, he mentored the great Belgian architect, Victor Bourgeois.

During World War I, he lived in Switzerland and in the Netherlands. He designed the Kröller-Müller Museum in Otterlo. From 1926 to 1936, Van de Velde was professor at Ghent University.

All content from Kiddle encyclopedia articles (including the article images and facts) can be freely used under Attribution-ShareAlike license, unless stated otherwise. Cite this article:
Henry van de Velde Facts for Kids. Kiddle Encyclopedia.