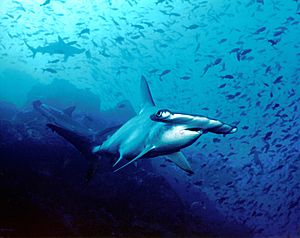 There are nine known species of Hammerhead sharks. They range from the length of 0.9 meters to the length of 6.1 meters, and weigh from 500 pounds (225 kg) to 1000 pounds (450 kg). They are usually light grey with a tint of green, but some are more greener in colour then others, and the belly in white.

The unusual structure of the head makes the head look like a hammer, this is why they are known as "Hammerhead sharks".

Since the eyes are positioned on the ends of the cephalofoil, Hammerheads are able to see everything around them, including what is under them, and what is above them. This head helps hammerhead sharks make very tight turns in the water, and it also helps them sense prey.

Hammerhead sharks are aggressive hunters and feed on crustaceans, molluscs like octopuses and squids, and many types of fish. They also eat other types of sharks. Hammerhead Sharks favourite type of food is stingrays.

Hammerhead Sharks are viviparous, meaning they give live birth. Females usually give birth to 12 to 15 pups at a time, but the Great hammerhead shark gives birth to around 20 to 40 pups at a time.

In 2007, the bonnethead was found to be capable of asexual reproduction, making it the first shark to be able to do this.

The hammerhead sharks are a monophyletic group. Sequence analysis shows they evolved from the Winghead shark. 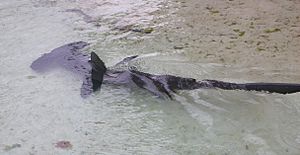 In Hawaiian culture, sharks are considered to be gods of the seas, they are also known as aumakua, protectors of humans, and cleaners of ocean life. Some of these sharks are believed to be family members who have died and have turned into sharks. But there are some sharks which are known as niuhi, or man-eaters. These sharks include Great White Sharks, Tiger sharks, and Bull sharks. The Hammerhead sharks are known as mano kihikihi, they are not considered as man-eaters or niuhi, but are considered one of the most respected sharks in the oceans, an aumakua. Many Hawaiians believe that they have an aumakua which watches over them and protects them from the niuhi.

All content from Kiddle encyclopedia articles (including the article images and facts) can be freely used under Attribution-ShareAlike license, unless stated otherwise. Cite this article:
Hammerhead shark Facts for Kids. Kiddle Encyclopedia.