Collingwood is a suburb of Melbourne, Australia, 3 km north-east of Melbourne's central business district. Its local government area is the City of Yarra. At the 2011 Census, Collingwood had a population of 6,467.

Collingwood is one of the oldest suburbs in Melbourne and is bordered by Smith Street, Alexandra Parade, Hoddle Street and Victoria Parade.

Collingwood is notable for its historical buildings, with many nineteenth century dwellings, shops and factories still in use.

It was 'named after' Lord Horatio Nelson's 'favourite admiral' Baron Collingwood (or, possibly after the Collingwood Hotel which existed there and was named after the admiral) by surveyor Robert Hoddle, under instructions from Superintendent Charles La Trobe, in 1842. 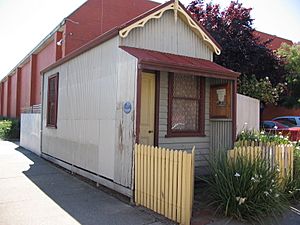 Subdivision and sale of land in Collingwood began in 1838, and was mostly complete by the 1850s. Collingwood was declared a municipality, separate from the City of Melbourne on 24 April 1855, the first to follow the state's major population centres of Melbourne and Geelong. Collingwood was proclaimed a town in 1873, and later a city in 1876.

Collingwood's early development was directly impacted by the boom in Melbourne's population and economy during the Victorian gold rush of the 1850s and 1860s. This resulted in the construction of a large number of small dwellings, as well as schools, shops and churches to support this new population. Around the same time, large industrial developments such as a flour mill and the Fosters brewery were being established.

At the turn of the century Collingwood's Smith Street rivalled Chapel Street in Prahran as the dominant home of suburban emporiums and department stores. The first G.J. Coles store was opened in the street in 1912.

Since the 1950s, Collingwood has been home to many groups battling to save the suburb's unique character against development and gentrification. 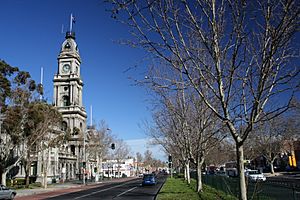 Collingwood's topography is mostly flat, but a prominent slope extends from Hoddle Street up to Smith Street, and also along sections of Hoddle Street.

The suburb is notable for its historical buildings, with many nineteenth century dwellings, shops and factories still in use. From its early days large commercial buildings often coexisted with small dwellings, occupied by working-class families and the mixture of industry and community continues to the present time.

Madman Entertainment has its head office in Collingwood.

The Collingwood Australian rules football Club (the Magpies) has a history dating back to 1892 as an incorporated football club. They were once housed at Victoria Park (but has since moved to the Lexus Centre.) In recent years they won the 1990 premiership and the 2010 grand final rematch against St Kilda.

Collingwood Technical School was established in July 1912 as a trades and technical training school. The school closed in 1987 and, forming along with the Preston Technical School, was the basis for the formation of the Northern Melbourne Institute of TAFE, which continues to have a Collingwood campus in Otter Street.

Collingwood College, a state P-12 school, is located in the suburb.

All content from Kiddle encyclopedia articles (including the article images and facts) can be freely used under Attribution-ShareAlike license, unless stated otherwise. Cite this article:
Collingwood, Victoria Facts for Kids. Kiddle Encyclopedia.