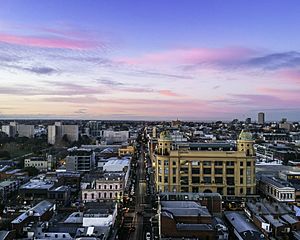 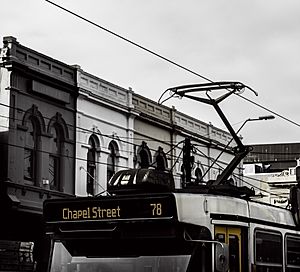 Tram route 78 travels along the entire length of Chapel Street, between Richmond and St Kilda. Tram routes 3, 5, 6, 58, 64 and 72 all intersect Chapel Street. The Sandringham line railway stations of South Yarra, Prahran, Windsor and Balaclava are all within 300 metres of Chapel Street.

The section of Chapel Street between Toorak Road and Dandenong Road used to see owners of modified cars cruising this section, without a specific destination. This practice is known in Melbourne as "Laps of Chaps" or "Chap Laps", and is generally confined to Chapel Street, although this behaviour originated on Lygon Street, Carlton. 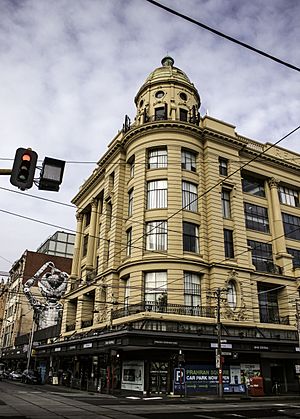 Joseph Crook is believed to have built the first house in Chapel Street in 1849, when the street was known as Fitzroy Road. Chapel Street was named after the first church in Prahran, an Independent (or Congregational) Church, built 100 metres north of Malvern Road on the east side, between 1850 and 1852. The first minister of "The Chapel", as it was known locally, was Rev William Moss. In an address to the Collins Street Independent Church in 1888 the Rev. Moss said, "I may mention that our chapel at Prahran was the only place of worship in the district for over two years, and ultimately gave to the business street of that flourishing city its name Chapel Street". The Chapel was closed in 1859, used as a school building until about 1883, when it was demolished. The only surviving church in the commercial part of Chapel Street, the Baptist Church, which was built in the 1850s on the corner of Wilson Street, is now the Irish theme pub Bridie O'Reilly’s.

A bridge linking Chapel Street and Church Street, Richmond was not built until 1857 and a ferry service operated over the Yarra River. In the 1850s much of the area between Commercial Road and the Yarra River was formed of deep clay deposits which resulted in a number of brickmakers establishing businesses on both sides of Chapel Street. The last of the brickworks, The South Yarra Fire Brick Company continued until the 1980s when it was sold to the Singapore Developer Jack Chia for "The South Yarra Project" development which was to include The Como Centre. 1888 sparked major development on the street with the permanent installation of a tram service.

Virtually from its beginning Chapel Street, between Toorak Road and Dandenong Road was a trading and shopping street with flour milling, butchers, bakers, drapers, boot makers, general stores, carpenters, bricklayers, farrier and blacksmiths, chemists and an undertaker. At the start of the 20th century large multi-level emporiums (department stores) began to spring up in the Prahran section of the street. At this point, Chapel Street rivalled the CBD as Melbourne's shopping destination. Emporium development continued right through to the 1930s.

In the 1970s, Pran Central opened as a major shopping mall. In the 1980s, the Jam Factory and Como Centre at the South Yarra end were the biggest developments to effect the character of the street. Gentrification ensured that this end became home to boutique fashion stores. 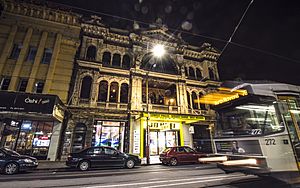 From the Yarra River heading south: 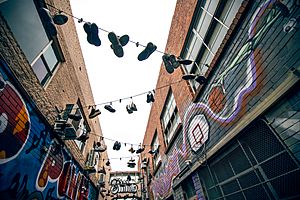 All content from Kiddle encyclopedia articles (including the article images and facts) can be freely used under Attribution-ShareAlike license, unless stated otherwise. Cite this article:
Chapel Street, Melbourne Facts for Kids. Kiddle Encyclopedia.