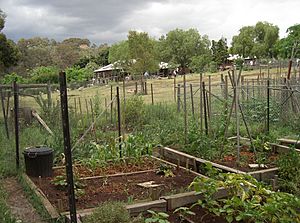 Vegetable plots and in the background, sheep. 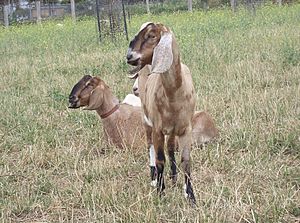 Nubian goats are kept at the Farm.

Collingwood Children's Farm is a not-for-profit, inner city working farm situated on the Yarra River in the Melbourne suburb of Abbotsford, Australia. It is located within Wurundjeri/Woiwurrung country. It is adjacent to, and considered part of the larger Abbotsford Convent complex. The Abbotsford Heritage Precinct Farmlands (APHF) supporting the Collingwood Children's Farm are unique in being the oldest continually farmed land in the state of Victoria. European farming commenced in early 1836, with formal land sales occurring in 1838. Farming on the APHF has continued uninterrupted from its agricultural use by Wurundjeri/Woiwurrung to grow crops such as Murnong (Microseris lanceolata). It is also the oldest Children's Farm in Australia, established in 1979.

The farm is open to the public all year round, from 9.15am to 4:00pm and visitors may explore the grounds at their own leisure.

The first Sunday of every month (excluding January) is a Family Day with a barbecue, plus horse and hay rides for the children. The farm also hosts a popular monthly Farmers' market, on the second Saturday of each month; selling fresh produce from the farm and over 60+ Victorian producers. To celebrate the Winter Solstice and as a fundraiser, the farm also holds an annual bonfire event.

The farm boasts an extensive range of animals from earthworms and peacocks to goats, sheep, horses, ducks, pigs, chickens and guinea pigs. Nearly all of the animals at the farm are classified as rare breeds.

The farm began in 1979, when a community committee leased a small plot of Crown land next to the Yarra River, used by the farm and Community Gardeners. Funding has come from various sources over the years and now entrance fees and donations make up the bulk of the farm's income. The farm relies immensely on community effort with staff, volunteers and a Young Farmer's Program working collaboratively to maintain the farm.

Visitors are able to try their hand at cow-brushing, which occurs daily at 10.15am and 4pm. Produce from the animals, such as honey, earthworm castings, and eggs are for sale from the farm when available. Weddings and special events are also held at the farm.

Cyclists and pedestrians will often take a journey along the Yarra River Trail as it passes through the Collingwood Children's Farm, following the Yarra River from the city to Dights Falls and further afield. They often stop and eat at the Farm Cafe (which is run independently of the farm).

All content from Kiddle encyclopedia articles (including the article images and facts) can be freely used under Attribution-ShareAlike license, unless stated otherwise. Cite this article:
Collingwood Children's Farm Facts for Kids. Kiddle Encyclopedia.