Clifton Hill is a suburb of Melbourne, Victoria, Australia, 4 km north-east of Melbourne's Central Business District. Its local government area is the City of Yarra. At the 2011 Census, Clifton Hill had a population of 5,790.

Described in the 1880s as the "Toorak of Collingwood", Clifton Hill fell out of favour, along with much of inner Melbourne by the mid 20th century. Later becoming a centre of Melbourne's bohemianism, the suburb has undergone rapid gentrification in recent years, and is now considered one of Melbourne's most liveable suburbs.

Clifton Hill is located immediately adjacent to Fitzroy North, with which it shares the same postcode. The border between Clifton Hill and Fitzroy North is Queens Parade and Smith Street. Merri Creek defines the eastern border of Clifton Hill.

In the mid-1850s, East Collingwood was known as an unsanitary flood-prone polluted flat. It was 'Melbourne's multi-problem suburb', described as "An ideal case study in the origins of pollution. The residents were soon wading in (their) own muck ... Collingwood became a cesspool for refuse." The area was "akin to a swamp and the few who ventured forth were looked upon after their return as people who had performed a somewhat perilous journey."

In the 1850s, the land that would become Clifton Hill was crown land, but unincorporated, serviced by unsurveyed tracks leading to Northcote and bounded by the surveyed roads of Heidelberg Road and Hoddle Street, which provided access to private quarries in the area, which is between Ramsden and Roseneath Streets, Clifton Hill nowadays, as well as the City of Melbourne quarry, located between Yambla Street and the Merri Creek.

Within a few months, the East Collingwood Local Committee sought permission for East Collingwood to annex what is now Clifton Hill. This annexation was controversial. Henry Groom, a City of Melbourne Councillor, declared, not surprisingly, "The freeholders of Clifton Hill have no desire to depreciate the value of their property by suffering it to be annexed to a swamp which to drain itself would drain our resources."

East Collingwood was successful in its acquisition of Clifton Hill, and also unsuccessfully pursued the annexation of Studley Park. This formed the City of Collingwood, which remained essentially intact until it was amalgamated, along with the City of Fitzroy and the City of Richmond, into the City of Yarra in 1994.

While much of Richmond, Fitzroy and Collingwood had been laid out by speculators anxious to increase profits, Clifton Hill was a professionally laid out suburb. Clement Hodgkinson, as Victorian Assistant-Commissioner of Crown Lands and Survey (1861–74), was responsible for the government subdivisions of Carlton (1860), North Carlton, North Fitzroy and Clifton Hill (1865-9), Hotham Hill (1866), South and North Parkville (1868-9). Under his supervision, suburban planning employed the grid system used by Robert Hoddle, Hodgkinson's predecessor.

Consequently, Smith, Wellington and Hoddle Streets were extended north to connect with Heidelberg Road (now Queens Parade), and planning of Clifton Hill proceeded on a more organised basis than that of the remainder of the municipality, including reservation of land for public recreation purposes.

During the following years, disputes arose as competing interests proposed different locations and routes for infrastructure to be constructed through the municipality, such as major roads and bridges. The North, South, ‘flat’ and ‘slope’ of the municipality disputed issues that were all seen to benefit one faction to the detriment of another.

A large drain, known as the Reilly Street drain (now located under Alexandra Parade), was constructed to drain the Crown land in Clifton Hill, in order to increase profits for the government when selling the land to private developers. However, this scheme failed when the drain overflowed onto the Collingwood Flat in the first winter after it was constructed. The Reilly Street drain became notorious and continued to be a hazard as occasionally someone fell in and was drowned.

Despite continuing urbanisation and population growth, the municipality remained mostly of rural appearance, with butchers in the south of the municipality holding grazing leases on Crown land in Clifton Hill and on the paddocks on the Collingwood Flat.

As a sentiment of enduring settlement, neighbourhood and civic pride began to develop in the residents of Clifton Hill, demand for public open space such as sporting grounds and public parks and gardens increased. In 1862, a petition from the 'Municipal District of East Collingwood' was presented to the Legislative Assembly citing the good work of the local Vigilance Committee towards improving Clifton Hill. Often, these reserves also served as common grazing areas when not used for recreational activities. It was at this time that the land that would become the Darling Gardens was reserved.

The land in Clifton Hill began to be sold in 1864 and the area boomed, along with the rest of Melbourne, in the 1880s. Between, it was reported, 'the progress ... was almost a backward one. It truly was "a howling wilderness".

Clifton Hill received its current name, distinguishing it from the remainder of Collingwood, from Clifton Farm, one of the first properties in the area. The word "Hill" was added by land developer John Knipe to spruik his new estate, the first subdivision of which, being 64 freehold properties, was auctioned by Knipe, George and Co. on 18 September 1871.

By the end of the 1880s, the area was described as "a residential suburb.... which has of late years been extensively built on with a good class of houses and numerous handsome shops. It has an elevated position, and commands an excellent view of the metropolis." The district was soon "covered with innumerable cottages of the comfortable working classes; street after street; row after row, of these neat brick buildings."

The Melbourne Tramway and Omnibus Company's cable tramway reached Clifton Hill in 1887, providing convenient transport to the commercial district of Smith Street, Collingwood, Bourke Street in the City Centre, as well as spurring development of the local Queens Parade commercial district around the tram terminus.

The elevated location, planned wide streets and calibre of housing resulted in Clifton Hill being described in the 1886 as "The Toorak of Collingwood".

Clifton Hill's residential attraction lessened entering the 20th century as middle class housing grew and industry took up land for factories, mostly in the South of the suburb, adjacent to Alexandra Parade. By the 1960s, the number of intrusive blocks of flats were built, particularly on prominent streets such as South Terrace, overlooking the Darling Gardens.

By the late 20th century, the amenity laid down during development in the 1880s was recognised once more, and Clifton Hill underwent rapid gentrification, with the median property price increasing from 112% to 160% of the Melbourne metropolitan median in the decade to 1996. Furthermore, by this time, the majority of industry had closed or moved elsewhere, freeing industrial sites for residential redevelopment. The former City of Melbourne Quarry at the corner of Ramsden and Yambla Streets, which had become a tip by the 1960s, had been redeveloped into an attractive park, including an adventure playground and skate park, further adding to the amenity of the area. 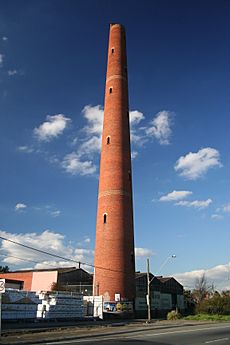 Accommodation in the suburb consists largely of single and double storey Victorian and Edwardian era dwellings, comprising a mixture of free standing houses, and semi-attached rows of terraces. The suburb is a relatively intact example of late 19th century and early 20th century development, and is now almost completely protected by heritage planning controls.

Hoddle Street bisects the suburb, dividing it into western and eastern precincts. The suburb is well served by parks and gardens, including Darling Gardens and Mayor's Park (western precinct) and Quarries Park (eastern precinct).

An attractive local shopping strip is located along Queens Parade, on the border with Fitzroy North, consisting of mainly Victorian era shopfronts in a reasonable state of preservation. Dwelling density in Clifton Hill is significantly lower than the remainder of the former City of Collingwood, which also included the suburbs of Collingwood and Abbotsford.

Clifton Hill railway station forms the junction between the South Morang railway line and the Hurstbridge railway line, and is located at the corner of Hoddle and Ramsden Streets, opposite Mayors Park and the Darling Gardens. Express and stopping all stations services frequently operate from the station, taking between 9 and 12 minutes to Flinders Street Station in the city centre.

Tram route 86 runs along Queens Parade, and provides access to Smith Street and Bourke Street in the centre of the city and to Docklands and Bundoora.

Several bus routes run along Hoddle Street and interchange at the railway station.

All content from Kiddle encyclopedia articles (including the article images and facts) can be freely used under Attribution-ShareAlike license, unless stated otherwise. Cite this article:
Clifton Hill, Victoria Facts for Kids. Kiddle Encyclopedia.