Victoria Park is a sports venue in Abbotsford, a suburb of Melbourne in Victoria, Australia. The stadium is oval shaped and was built to host Australian rules football and cricket matches. In the past Victoria Park featured a cycling track, tennis courts and a baseball club that once played curtain raisers to football matches.

At its peak, from 1959 to the late 1980s, Victoria Park was the third largest of the suburban VFL stadiums after the Melbourne Cricket Ground and Princes Park. However, in the 1990s the AFL's ground consolidation policy forced clubs away from their traditional home grounds and Collingwood played their last AFL game there in 1999. Collingwood continued to use Victoria Park as a training and administration base up until 2005. The club has since returned to play the majority of home reserves and women's league matches at the venue.

Victoria Park was established in 1879 on Dight's Paddock by Frederick Trenerry Brown and David Abbot as part of the planned Cambellfield Estate. The twelve hectares of land that was known as "Dight's Paddock" until its sale was used as cattle agistments from 1838 when the land was sold at auction in Sydney. In 1878 Fred Brown arranged for his uncle Edwin Trenerry to send him £12,000 to be used to purchase the 12-hectare (30-acre) paddock. Edwin Trenerry was a resident of Cornwall, UK. In 1882 the land was given to the citizens of Collingwood for their "resort and recreation". A cricket pitch and cycling track were installed and the ground was used by the Capulet Cricket Club and local junior football clubs. 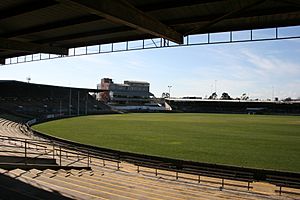 The Sherrin, Bob Rose and Ryder Stands in 2007

The first game at Victoria Park was witnessed by an estimated 16,000 spectators and although Collingwood lost, it signalled the amazing popularity and drawing power of the Collingwood Football Club and Victoria Park.

The first major stand was completed midway through the 1892 season and it was not long before the club was back at the town hall asking the council to fund the construction of further facilities to accommodate the enormous following the club generated. In 1900 the Ladies Stand was constructed and in 1909 architect Thomas Watt designed the Member's Stand. The Ladies Stand on the grounds north side, along Abbott Street, was pulled down in 1929 to make way for the Jack Ryder Stand. This grandstand would provide state-of-the-art facilities for players of both the Collingwood Football and Cricket Clubs and also seated approximately 3,000 supporters. The Ryder Stand was designed by architects Peck and Kemter. The steel-framed concrete stand with cantilevered roof was named after cricketer Jack Ryder.

By the end of the 1929 season Collingwood had completed the third premiership of the record-breaking four in a row. The team was perceived to be invincible at Victoria Park and all rival clubs dreaded travelling there. This was in stark contrast to the prevailing economic conditions as the suburb was one of the hardest hit by the Great Depression. For many in the area, to see the Magpies win at Victoria Park was the only relief from melancholy of daily life on the unemployment queue; the football club offered sustenance workers free entry to games during this period.

In 1953 Collingwood won its first football premiership since 1936. With this success as a springboard, Collingwood secretary, Gordon Carlyon, started negotiations with the Collingwood council to provide for further improvements to the ground. The maximum seven year leases granted by local governments did not give the football club enough security of tenure to proceed with the grand plans that were being laid down. Carlyon was unsuccessful on several approaches to council until a technicality was found in the Local Council's Act. Clause 237 allowed Collingwood to take a long term lease over the ground provided the Club agreed to provide for major improvements to the site. Carlyon first approached the council in 1955, but they voted 14 to 1 against the proposal. The following year Carlyon sharpened his approach and took a new, even better plan to the council and once again the council voted 8 to 7 against. Carlyon asked one of the dissenting councillors why he voted against the proposal and was surprised to discover that seven of the eight councillors were concerned that they would lose their free entry to Collingwood home games if the football club took control of the ground. Within weeks Carlyon returned to the Council with the very same proposal and a handful of Social Club memberships which turned the vote 14 to 1 in favour and Collingwood was then set up with control of its own home ground until 1996. 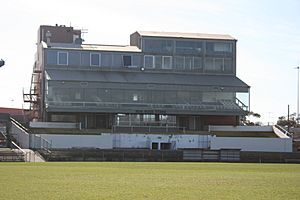 The social club, now known as the Bob Rose Stand, was the first to be completed. It was opened in 1959 by the state governor, Sir Dallas Brooks. The next stand to go up was the R.T. Rush stand in 1965 (opened in 1966), named after former premiership player and club administrator Bob Rush. This allowed fans to have a significantly better view than the old open concrete terrace and hill. The old Member's Stand built in 1909 was pulled down to make way for the Sherrin stand in 1969. Only two thirds were completed and the final third of the Sherrin Stand was finished in 1978.

Right up to the late 1980s work continued to upgrade and modernise the facilities at the ground and the plans were laid down to create further covered seated areas for patrons as pressure was placed on the club by the new nationally based competition to abandon the ground and relocate to the MCG. Local residents objected to the new plans. The club secured approval from the council, but after the election that followed the new councillors retracted that support and would not allow the club to continue work on the development of the site.

Starting in the late 1980s, Collingwood started moving some of their home games to VFL Park and the MCG. The move was a success financially for the club as it unlocked better exposure to the public as these venues had light towers enabling games to be played at night to boost television audiences and attendances. Beginning in 1994, Collingwood started moving their games to the MCG by playing all but three matches at the venue, and in 1998 and 1999, only two games a year were being played at Victoria Park. In 1996 the cricket club moved away from the ground after a 100-year association with it. The last AFL match at Victoria Park was played in the last fixture of the season in 1999 against the Brisbane Lions. Collingwood lost their 662nd and final game at Victoria Park by 42 points and finished on the bottom of the ladder for just the second time in their history. While Collingwood were scaling down their presence at Victoria Park, the Victorian Football Association staged their 1994 and 1995 finals series at the ground. The last VFL match of the era was played the following year in 2000 when Collingwood lost to Williamstown. The ground's capacity at closing was around 24,000, significantly smaller than the other venues used by the AFL at the time.

Following the move to the MCG, Collingwood has seen an increased number of spectators see their games, thanks to the much larger capacity of the stadium. Collingwood used Victoria Park for their training sessions leading into the 2002 and 2003 AFL Grand Final matches. The ground was also used for some of the pre-season matches prior to the 2004 AFL season. The ground is still considered to be the club's spiritual home. Collingwood moved its training facilities from Victoria Park to the purpose-built Westpac Centre, Melbourne (formally Lexus Centre) at the Olympic Park Complex in 2004.

Plans for the ground to be demolished following Collingwood's move away from the ground have become drawn out over a number of years because the ground is protected under the Victorian Heritage Register because of its cultural heritage significance at state level. Plans for demolition and reconstruction on the site have said that the oval will remain even if the stands do not.

In 2009, the City of Yarra council voted to allow Collingwood's VFL team to recommence matches at Victoria Park. The team currently splits their home games between Victoria Park and Olympic Park Oval. By 2019 Collingwood were also playing most home matches for its women's teams in the AFL Women's and VFL Women's leagues at the venue, ensuring widespread use of Victoria Park by the club.

The ground has also been the base for the AFL Victoria umpiring department, which officiates "competitions, carnivals and other events, including the VFL and TAC Cup competitions".

In May 2010, Yarra City Council announced a $7.2 million upgrade of Victoria Park, to transform the park into a major community recreation space. At least $7.2 million was spent on the redevelopment, including $5.0 million contributed by the Australian Football League and the Collingwood Football Club, while the Australian government contributed $3.5 million.

The works were completed in 2011 and the revitalised ground was opened at a community event on 4 December 2011.

In May 2020 a $2 million upgrade to some of Victoria Park's facilities commenced, financed by the Victorian Government, City of Yarra, AFL and Collingwood. The Sherrin Stand was refurbished and suitable changing rooms and recovery facilities were constructed for the club's female footballers, allowing the women's teams to base themselves at the ground. The upgrade was completed in time for the 2021 season.

The interior of Victoria Park is shaped in an oval, almost a circle, to fit with the boundaries of the playing field. Whilst there were no large display devices set up at the ground during its existence, one was set up via crane for the final game.

The ground is made up of several grandstands:

The eastern end of ground did not have a stand in place, just grass and a scoreboard that was demolished in 2011. This was for standing room. No lighting for the playing field was built and therefore the venue did not host night games once they were introduced. Some lights were installed for darker day games to support the player's vision. Entry into the ground was by manned turnstile and could be made from all stands.

Austadiums lists the capacity of the ground at 15,000. The ground record crowd for the oval was set on 26 April 1948 when 47,224 turned out to see Collingwood defeat South Melbourne by 53 points.

The ground is located about 4 km to the northeast of the Melbourne central business district. The ground had limited parking space on match days which has now been made unavailable now that the ground is unused. The ground has its own railway station about 200 metres from the ground, situated on the Hurstbridge and Mernda lines.

All content from Kiddle encyclopedia articles (including the article images and facts) can be freely used under Attribution-ShareAlike license, unless stated otherwise. Cite this article:
Victoria Park, Melbourne Facts for Kids. Kiddle Encyclopedia.