Forbes railway station opened on 18 December 1893. The last passenger service ceased on 15 October 1974, and the station formally closed in 1990.

The station building has operated as the Forbes Railway Visitor Information Centre since c. 1990. 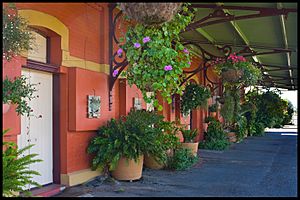 The heritage-listed complex consists of a type 4 brick station building of standard roadside design and a brick and concrete-faced platform, both dating from 1893. The dock platform, station fences and garden and entrance forecourt are also heritage-listed. 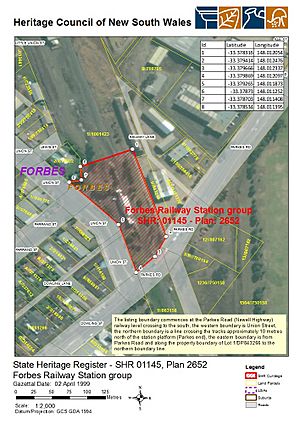 Forbes railway station and residence is one of the best surviving standard roadside stations surviving. Both buildings are in excellent condition and retain their traditional setting with good detailing to both buildings and grounds. The station area retains planting and entrance arrangements with fencing that illustrate past use of the railway property. They are important elements in the townscape of Forbes as significant civic buildings located at the northern entrance to the town. The garden remnant is important as the station garden was a winner of many railway garden competitions.

Forbes railway station was listed on the New South Wales State Heritage Register on 2 April 1999 having satisfied the following criteria.

All content from Kiddle encyclopedia articles (including the article images and facts) can be freely used under Attribution-ShareAlike license, unless stated otherwise. Cite this article:
Forbes railway station Facts for Kids. Kiddle Encyclopedia.