Warren is a town in the Orana Region of New South Wales, Australia. It is located off the Mitchell Highway, 120 kilometres north west of Dubbo, and is the seat of the Warren Shire local government area. At the 2016 census, Warren had a population of 1,530. Warren is included in the Central West Slopes and Plains division of the Bureau of Meteorology forecasts. 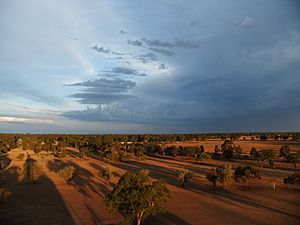 Looking to the East of Warren before entering town 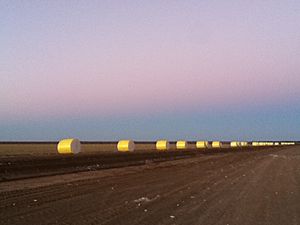 Purple sunrise over the white and gold cotton, taken from farm in Warren 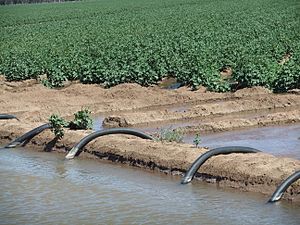 Before European settlement the area is said to have been occupied by the Ngiyambaa Aborigines. Explorer John Oxley camped on the present town site during his investigation of the Macquarie River in 1818. He noted an abundance of kangaroos and emus. Charles Sturt carried out further exploration in 1828-29. Cattle were grazing hereabouts by the late 1830s.

Warren station was established in 1845 by Thomas Readford and William Lawson, the son of explorer William Lawson who was a member of the first European party to breach the Blue Mountains in 1813. Some say the name derives from a local Aboriginal word, meaning "strong" or "substantial". Another theory is that it represents the adoption of a contemporary English term, "warren", meaning a game park - perhaps a reference to the picturesque riverside setting where the station hut was built (on what is now Macquarie Park) and to the large numbers of wildlife in the area.

A small police station was built near the hut to protect the new settlers from Aborigines but, there being no disturbance, they soon moved on. The hut was located by the site of a river-crossing on the main route from Dubbo. Stockmen camped here in the bend by the river, adjacent to the Warren Hole (a natural and permanent waterhole), before crossing over on the gravel bar when the water was sufficiently low. A few stayed on and a site for a township was consequently surveyed in 1860 with land sales proceeding in 1861.

Warren was incorporated as a municipality in 1895 and the Warren Weir was established in 1896. The town benefited greatly with the arrival of the railway in 1898, making it the rail head for an enormous area. In general terms, its prosperity rose and fell with the price of wool. In the 1920s the town developed quite substantially. In the Great Depression the economy shrank, expanding again in the postwar years. The eternal water shortage was greatly eased when Burrendong Dam was opened in 1967, allowing the development of cotton and produce.

The Macquarie River runs through Warren.

The Far West Academy of Sport is based in Warren and is responsible for identifying talented young sportspeople across 42% of the state.

Warren Gun Club has been running since 1898 and continues to hold a number of feature events throughout the year, attracting sporting shooters from around New South Wales. 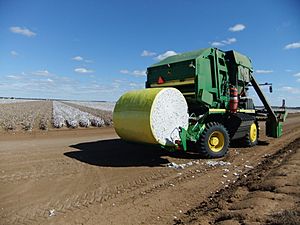 Round balers making it easier for farmers. Taken on farm In Warren NSW

Warren is one of the main centres for the wool and cotton growing industries in New South Wales. It is a well-known area for merino breeding with local studs that include Haddon Rig, Raby and Egelabra.

Warren is the startup location of Commodity Broking Services (CBS), whose purpose is to aid and educate Australian farmers suffering from drought with some financial stability in commodity trading and product protection. CBS's agricultural division is still located in Warren.

All content from Kiddle encyclopedia articles (including the article images and facts) can be freely used under Attribution-ShareAlike license, unless stated otherwise. Cite this article:
Warren, New South Wales Facts for Kids. Kiddle Encyclopedia.