Portland is a town in the Central Tablelands of New South Wales, Australia. At the 2016 census, Portland had a population of 2,424 people. The town was named after Australia's first cement works.

Portland is part of the gateway to the Central West and is located between Oberon, Mudgee, Bathurst, Lithgow, and the Blue Mountains. It is a short drive from both the Great Western and Castlereagh Highways. It is accessed from the Great Western Highway via Wallerawang or from Sunny Corner Rd at Meadow Flat. It is accessed from the Castlereagh Highway via Boulder Road at the Mt Piper Power Station.

The town centre has a distinct business district, several parks and sporting clubs.

Prior to white settlement, the Portland region was occupied by the Wiradjuri people. The first European in the area was James Blackman who surveyed roads in the area in 1820 and today Blackman’s Flat and Blackman’s Crown bear the family name.

The town of Portland is of interest as an historic mining town, and also as the place of the first cement factory in Australia. Portland really got its start when Thomas Murray selected 61 hectares of land in 1863 and constructed his first lime kiln on what is now the corner of Lime and Villiers Streets. The railway came to Portland in 1883 and the station was called Cullen Siding until 1889. The Cullen Bullen Lime and Cement Company established operations in the village that year. During the early 1890s, the first cement-making kilns west of the Blue Mountains were built in Portland.

In 1894, the village was gazetted as Portland, the name derived from the cement-making process which was already well underway in the area.

The cement works opened in 1902 and Portland was declared a town in 1906. Many of the original buildings in Portland were built by the cement works company for employees and still stand. Well-known Australian brand names now adorn many of the historic shops and buildings, creating a strong link to "yesteryear" that is celebrated by the town. 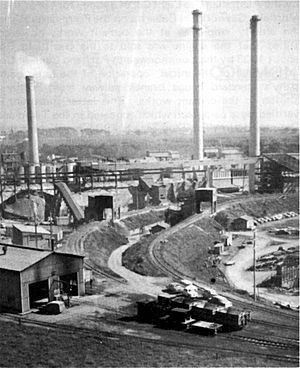 From 1902 cement produced at the "Commonwealth Portland Cement Company" mill helped build up the cities of Sydney, Melbourne, and Canberra. "Portland cement", a phrase synonymous with high quality cement anywhere in the world, was milled using limestone from onsite quarries and shipped throughout Australia. The town of Portland grew up around the Cement Works and the company contributed greatly to the area, building facilities that were needed for employees. A bath house, casino, an ice skating rink, olympic swimming pool, and living quarters were supplied to workers. The cement kilns even generated enough energy to power the homes around it.

The factories of Portland and the surrounding area required the transportation of limestone, coal, and other materials, and to this end, a number of private industrial railways and tramways were constructed.

At an altitude of 925 metres above sea level, Portland is the 21st highest town in Australia and classified as a temperate zone. Cool winters and warm summers ensure four distinct seasons and snowfalls each winter.

Originally constructed in as a theatre and public hall, the original building was destroyed by fire in 1925. Current release films are shown monthly and the hall is maintained by volunteers and available for community use.

In 2001, Ron Bidwell, a signwriter by trade, together with his fellow "Letterheads" recreated vintage signs dating from 1895 to 1945 on local shop walls. ‘Painting Portland’ was a project initiated by Ron Bidwell and completed during the Letterheads Wallnuts Weekend, in 2001. Thirty four signwriters travelled to Portland to work with locals to restore and reproduce advertising used in the early part of the 20th Century. Goanna Salve, Kinkara Tea, Bushell’s Tea, Mother’s Choice Flour, Uncle Toby’s Oats, Arnott’s Biscuits, Toohey’s Flag Ale, Solvol, Federal Safety Matches and Swagsman Blend Tea are a selection from the colourful Signs of Yesteryear.

The well serviced town is surrounded by a combination of national parks, crown land, farming areas and forestry, and has many areas that are well known for outdoor recreation. Adjacent to the town is a 650-acre Town Common with the Williewa Creek and flats running through the centre. "The Williewa" is an open eucalypt forest with an abundance of Eucalyptus macrorhyncha (Red stringybark) and native wildflowers and is popular with picnickers, mountain bikers and bushwalkers. There is a small well stocked dam and a plethora of birdlife as well as native wildlife, including Calyptorhynchus funereus (Yellow Tailed Black Cockatoo), Platycercus elegans (Crimson rosella), Alisterus scapularis (King Parrot) and Macropus giganteus (Eastern grey Kangaroo).

The surrounding forests are popular with 4WD and dirt bike enthusiasts. Sunny Corner, Ben Bullen, Wolgan and Newnes State forests are all nearby and bush camping is available.

Portland is also a popular destination for geocaching, as well as rogaining and orienteering. The town is close to the Wollemi National Park, the Gardens of Stone National Park and the Turon National Park.

Portland is abundant in wild foods dependent on season. Spring is when wild apples and stone fruits are in bloom. Summer is the season for ripe blackberries, which are a noxious weed, and the more difficult to locate stone fruits. During Autumn, apples, pears and quince are ripe and the forests are rich with mushrooms. Lactarius deliciosus and Boletes (Boletus portentosus) are safe to eat.

Trout fishing is possible in local streams and creeks, the best known spot being Thompson's Creek Dam which is a twenty-minute hike from the carpark on Thompson's Creek Rd via the Falnash State Forest.

All content from Kiddle encyclopedia articles (including the article images and facts) can be freely used under Attribution-ShareAlike license, unless stated otherwise. Cite this article:
Portland, New South Wales Facts for Kids. Kiddle Encyclopedia.