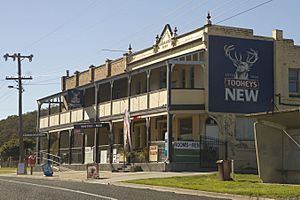 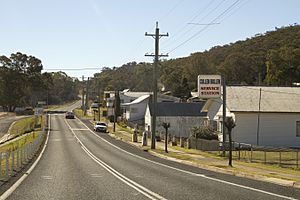 Cullen Bullen is located on the Mudgee Road, 168 km north-west of Sydney, 28 km north of Lithgow. At the 2006 census, Cullen Bullen had a population of 198 people. The Cullen Bullen village is sustained by local mines and the Mount Piper Power Station.

In the language of the Wiradjuri people, who occupied the district prior to white settlement; the word "cullen bullen" is believed to mean "Lyrebird".

The first European in the area was James Blackman, who was surveying a roadway from what is now Wallerawang to Mudgee, in 1821. Blackman was followed in 1822 by William Lawson and later Allan Cunningham in 1822-23.

Robert Dulhunty – the subsequent founder of Dubbo – took up the first land grant in the area in 1828. He built a homestead on land which now lies on the back road from Cullen Bullen to Portland.

All content from Kiddle encyclopedia articles (including the article images and facts) can be freely used under Attribution-ShareAlike license, unless stated otherwise. Cite this article:
Cullen Bullen, New South Wales Facts for Kids. Kiddle Encyclopedia.